At least one British Army officer in Afghanistan appears to think so.

“A female Harrier pilot ‘couldn’t identify the target,’ fired two phosphorous rockets that just missed our own compound so that we thought they were incoming RPG’s, and then strafed our perimeter, missing the enemy by 200 meters,’’ he wrote, according to British news reports. RPG stands for rocket-propelled grenade.

As you might suspect, that comparison went over like a fart in church up-echelon. Hard to make any general conclusions from one man’s specific observations, but it’s interesting how in this fight, the voices of the troops – for better or worse – are much more likely to pass through the filters, military, civil, media and that once would have held them in check.

A B-29 Memory Amended

The B-29 was an amazing aircraft for its day, a complete game changer. More was spent on its development and production than the Manhattan Project.

There was a wonderful book that dealt with the B-29 written by the author of Flags of Our Fathers, James Bradley, called Flyboys.  Downfall, recommended by a Lexican, was another good book that went into a lot of detail on the Superfortress.

If you are lucky enough to see one of the 2 flying today, it is still an impressive airplane, 70 years later. I wrote about visiting FiFi a couple of years ago, and posted some pictures.

END_OF_DOCUMENT_TOKEN_TO_BE_REPLACED

I don’t know how they did it, but check out this   1957 film of the Air Force F-86s. It only has a 2:08 duration, but what scenes. Someone on the Facebook group wondered if Paul Mantz filmed this.

TALES FROM MY YOUTH: The Adventure of the Green Iguana 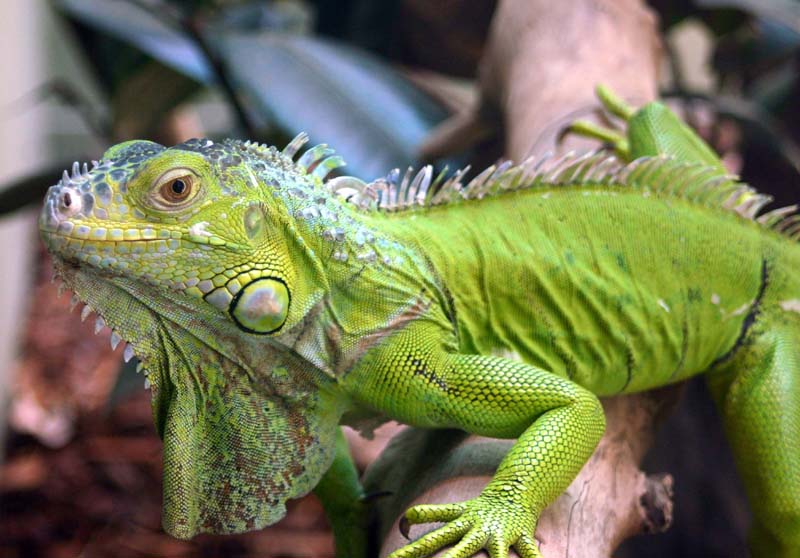 When I arrived at Wurtsmith AFB on December 8, 1978, I remember expecting a crack bomber unit embodying steely-eyed discipline, Spanish Inquisition-level devotion to regulations, and a certain sunglasses-silk-scarf-and-grin panache that would indeed tell you that you were an elite, entrusted with the Nation’s Survival In It’s Darkest Hour.

END_OF_DOCUMENT_TOKEN_TO_BE_REPLACED

Happy birthday to the US Air Force.

The Adventure of the Green Iguana

TALES FROM MY YOUTH: (Author is another Lexican)
The Adventure of the Green Iguana

Now, I’d met Ivan on a couple of occasions – he was a fairly good sized, bright green iguana having a calm, phlegmatic attitude, as do you and I. Never knew exactly what he ate – Eightball suggested on a regular basis that the source of Ivan’s diet was somewhat more sinister than the insect life that abounded up north – but he seemed happy and well-cared for enough, so much so that on occasion we suspected Ivan was indeed a lot happier and well-cared for than Mrs. Eightball and their son. However, that night Eightball looked around the wreckage of his life and came to the conclusion that the only source of love, unquestioning devotion, and comradeship unto the end was Ivan, and Ivan, in unspoken eloquence, would share that end. Or maybe Ivan was just too damned cold to argue, being where we were, but never mind.

END_OF_DOCUMENT_TOKEN_TO_BE_REPLACED

Tales From My Youth –Final Installment

…I’ll give him this: at this point, A1C Dumbjohn was doing everything according to Hoyle, with just a smidgen of Clint Eastwood thrown in. I had not taken my eyes off the little twerp’s finger – which was ON the trigger, though the safety was on – and I became aware of Captain Space next to me, with his hands in the air. Well, not wanting to be the odd man out, mine went up as well. With that, Dumbjohn motioned us outside and snarled, “Up against the wall!” as he called the SPs and notified them of a Helping Hand, the code at the time – and may still be – for a violation of nuclear security. There were some loud and most definitely urgent squawks overheard on the radio, and we settled down to await the Cavalry. I had been Jacked Up, friends – an incident that at best left an unpleasant taste in one’s mouth and at worst led to one standing tall before Colonels With Much Fruit Salad explaining just why you were such an idiot.

END_OF_DOCUMENT_TOKEN_TO_BE_REPLACED

Tales From My Youth – Part 2

Tales of My Youth – Part 1
With Friends Like These…

It was just a few days before Thanksgiving, and I was eagerly looking forward to the following Wednesday, when I was due to go home and marry Katherine, a beautiful and formidable young Lady from my home town of Cleveland. My future brother in law – a Loader, though I have never held that against him – and a hospital troop were of the party as well, and the three of us were looking forward to a week or so of happiness and comparative quiet.

END_OF_DOCUMENT_TOKEN_TO_BE_REPLACED

I don’t believe heroism has ever been in short supply when America has needed her warriors.

Vietnam was no exception.

From the soldier or Marine leading point on a patrol, to the tunnel rats, the A-1 “Sandy” and HH-53 “Jolly Green Giant” pilots who risked their own lives (and sometimes died) rescuing downed pilots…

A fellow who worked at the hardware store I frequent I believe typified the Vietnam Vet. I found out about Ray’s service over knowing him (across the counter) over a few years. He was not given to braggadocio.

Which as an aside, I have learned over the years generally the quieter the person, the deeper the well.

Over some conversations I learned that he was in an elite Marine Recon unit that is mentioned in a book or 2. He recently moved to Arizona, but while he was here I did notice a certain expertise in handling shoplifters.

There are Rays all across the country; quietly going about their daily lives today.

A few years ago I learned about a group of pilots who did an incredible job, which was to look for enemy anti aircraft (AA)  batteries. Once they spotted a battery they encouraged them to shoot at them. During this interval they would “jink” – turn sharply – every 5-7 seconds – which happened to be the typical flight time of the 37mm AA round, the usual ordnance aimed at them. They did face everything from SA-2 missiles to small arms.

Once the battery was located, they would call in Air Force and/or Navy pilots in fighter-bombers to destroy it.

The first pilots in 1967 devised the tactics that the subsequent pilots would use.

They flew the 2 seat version of the F100 (F100F) , a pilot and a spotter. Both were pilots, and would rotate seats with each mission. They’d fly their missions at low level, 350-550 mph, looking for batteries and anything else to disrupt the enemy.

One  was awarded the Medal of Honor, 2 became Air Force Chiefs of Staff, 6 became general officers, 1 a winner of the Collier Trophy, and 1 became the first man to fly non-stop, un-refuelled around the world.

The Medal of Honor recipient? The first commander, Bud Day (call sign Misty 01) , was directing some F105s against a SAM site 20 miles north of the DMZ in North Vietnam. His plane was hit by 37mm AA fire and in the ejection Day broke his arm in 3 places when he struck the side of the cockpit. His spotter was rescued but Day was unable to contact the helicopter with his survival radio, and was quickly captured by a North Vietnamese militia unit. Despite his serious injuries, on his fifth night of capture, Day escaped his captors, and although stripped of his boots and flight suit, made it south across the DMZ.  He was within 2 miles of a U.S. Marine fire base at Con Thien, when the Viet Cong recaptured him, shooting him in the leg and hand.

He was taken back to the original camp, tortured and starved and eventually ended up at the “Hanoi Hilton”, a cellmate of John McCain. McCain nursed his atrophied arm. He remained there until March 14, 1973.

On March 4, 1976 he was awarded the MOH by President Gerald Ford for his personal bravery.

Quite a group of pilots.

I just returned from a nice drive through Idaho, Washington and Oregon, and had to stop at the Evergreen Aviation Museum. It is a wonderful museum, and among their exhibits is a restored F-100F, which was the first plane used by the Misty FACs. 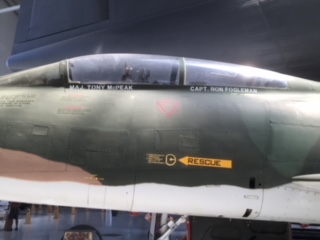 A Visit To See A Hawk

The last few days, I have been reading some interesting articles on what we now call UAVs, or Unmanned Aerial Vehicles. And from what I have read reinforces my belief that there is very little truly “new” under the sun.

Most inventions, considered radical departures from the norm in society have had the stepping-stones from others, sometimes years ago, sometimes decades.

But to go into all this history, with a little post about our second visit to Beale, would tend to tell you a lot about everything and nothing specific about anything.

As a late friend would admonish me – focus.

As I soon learned, there are UAVs for very specific purposes. While the Predator is capable of carrying missiles, the Global Hawk’s mission is strictly recon.

Anytime whenever I have had an invitation to see/learn about anything aviation-related, count me in.

While we didn’t go to the control room, we got a nice tour, including the area where the pilots “suit up” for the U2, (and previously the SR-71).

Join me for a vicarious tour.

Some facts about the Global Hawk. I don’t how much of this is applicable to its Navy variant.

In 2001, it was still under development by Northrop-Grumman, but rushed into production after 9-11.

It’s flight – anywhere in the world – is controlled from Beale.

Its mission is programmed on the ground. It takes off – and lands – automatically and right down the centerline.

It’s engine is also used in a Cessna Citation jet. (30 years ago I worked for Cessna in Wichita when the Citation lineup was a lot simpler. Don’t ask me which Citation Jet today 😉 )

Landing gear is borrowed from the  F-16.

At the time of our lecture, we were told that the FAA still didn’t know how to integrate large unmanned drones into the controlled airspace (which I think is still the case, and could be the subject of another article by itself!). So Beale gives a notice to airmen (NOTAM) advising them that a Global Hawk will be taking off – or landing.

We also learned a bit more about the U2 – I was interested to learn that there is a civilian life-support specialist – who worked at his desk right by the legendary Kelly Johnson, still under contract.

So join me for a vicarious tour around the base – with additional commentary by your tour guide!

At the start of the tour, we received a comprehensive lecture. My thanks to the Airman who gave this – in the interest of some privacy I’ll leave out the name(s) but you know who you are 😉

We headed out to a hanger that housed a Global Hawk – my impression of it was that it looked like a large flying Beluga Whale .

Just in case you don’t know where you are! 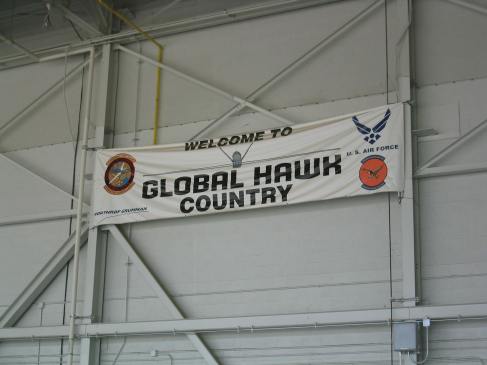 …your tour guide (about 20 lbs heavier)

…Lest you forget Beale has other inhabitants!

(and formerly SR-71 drivers) suited up

..This is the outside (and controls) of a altitude chamber – demonstrating Hypoxia (oxygen starvation to the brain) – what Lex wrote about .

Where U2 Pilots suit up, with a reminder of their other famous plane – now retired… 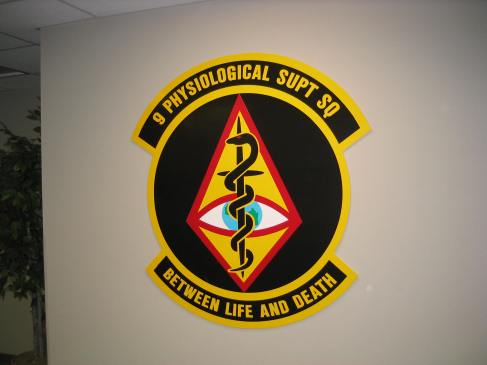 What the U2 pilots wear today…

…and no visit would be complete without a visit to Beale’s other famous inhabitant! 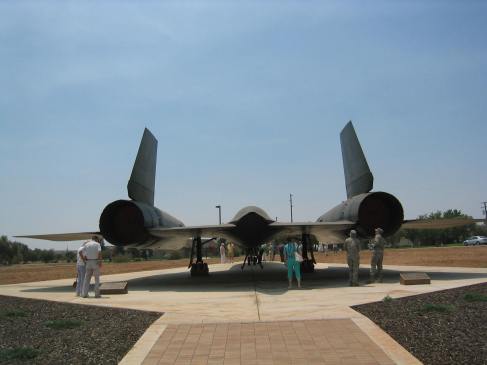 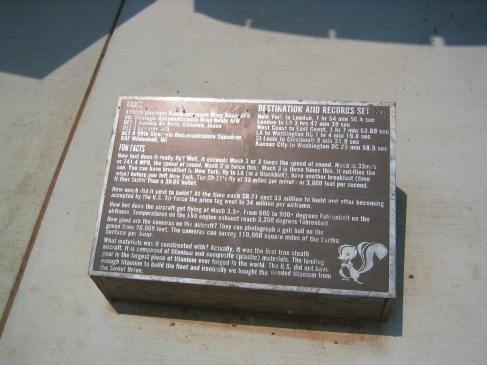 I hope that you enjoyed the tour and I hope that Lex, wherever he is, enjoyed it too.