The Northrop P-61 Black Widow has always been one of my favorite fighters of World War 2.

Conceived as a night fighter that served in, European, Mediterranean, China-Burma-India, and Pacific theaters of war, the P-61 and a comparatively short service career with the US Army Air Corps and later the USAF, and US Government serving from 1943 to 1954.

There are a few preserved non flying examples located the Smithsonian National Air and Space Museum:

The National Museum of the USAF: 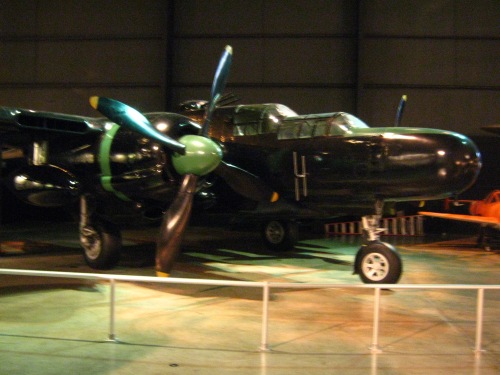 My photo of the P-61 on display at the National Museum of the USAF.

There’s another at the Beijing Aviation Museum: 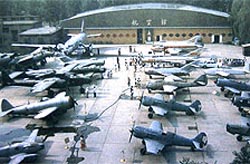 The P-61 at the Beijing Aviation Museum (at left)

Now you’ve read a little about the Black Widow it’s time to fly. Grab your P-61 POH (you know I have one…). Also, review the film below:

Then head to the Mid Atlantic Air Museum. They are restoring one to flyable condition (that’s the only one I know of). The site is updated regularly so periodically check in and take a look at their progress (maybe throw then a few bucks to help out).

Spending Sunday trolling the interwebs when I should be doing someting productiive and low and behold:

I enjoy seeing the intense physical activity it takes to fly a multiengine multicrew airplane in this environment.

The Minnesota Department of Natural Resources has the 415’s predessor, the CL-215 in service:

One Team, One Scream

I apologize for missing the TDL post for yesterday – I was up and out early to help move a neighbor; TDL completely slipped my mind. First time I’ve done that…my apologies once again.

We were in Lancaster and Palmdale today.

The photos are of the items I procured. If it has an off the wall name and is not yellow and fizzy, I will probably like it.

Found this on the Mothership:

One Wonders What Lex Would Have Thought…

I have an ideer.

A Ship that is Tired

The American Crisis by Thomas Paine

These are the times that try men’s souls. The summer soldier and the sunshine patriot will, in this crisis, shrink from the service of their country; but he that stands it now, deserves the love and thanks of man and woman. Tyranny, like hell, is not easily conquered; yet we have this consolation with us, that the harder the conflict, the more glorious the triumph. What we obtain too cheap, we esteem too lightly: it is dearness only that gives every thing its value.

The immortal opening lines to Thomas Paine’s The American Crisis still ring true over two centuries later. We are again faced with trials and tribulations. We are assailed from within and without.

Terrorists actively seek to kill our citizens without mercy. Innocent men, women and children are slaughtered around the globe by those who would seek to dominate their fellows. It is not just we who are under assault, civilization itself is being attacked.

Our own government lies to us. The denizens of Washington DC seek more and more of our hard-earned wages to finance programs that do not work. That have no hope of working. Programs based on a faulty understanding of both history and human nature.

The government is handing out fish, it seems as if the goal is to make us all dependent on government. This is completely opposed to the way things are supposed to be. What we should have, and President Abraham Lincoln said it best, is a:

Bear in mind, elected officials work for us, we do not work for them. We pay their salaries, they are supposed to do our bidding. But they must also operate in a manner which is for the benefit of the entire nation, not just their district. While this is not by any means an easy job, it is an important job. Too important to be governed by sordid party politics and far too important to be governed by whomsoever contributes the most money to a candidate.

Our politicians seem to be for sale to the highest bidder. The back room “movers and shakers” jockey for power and prestige, deciding who will be the latest “pretty boy” to be put up for election. Which candidate looks best on TV, which candidate can parrot lines from a Teleprompter the most naturally, which candidate appeals to the most voters.

Now it’s not all the fault of the politicians. If the voters themselves would just wake up and pay attention to the issues. Would just wake up and look beyond Twitter and Entertainment Tonight to see what is really going on in the country and in the world at large. If only the voting public would get off their butts and understand just how critical things have become.

Are we at the point where all we’re interested in is “Bread and Circuses”? Is this Grand Experiment, this thing called Freedom, doomed to fail? Are we in the last days of the Republic?

There are times when I despair for the future of my country. Is it too late? Will we finally wake up and take back our heritage, our freedom? Will we squander the many lives lost, the vast amounts of blood shed in the past to preserve our way of life? I cannot answer this to any reasonable certainty. All I can do is pray and hope that we, as a people, realize that democracy, that freedom is hard work. Freedom, most certainly, is not free.

America, Wake Up!
Before It’s Too Late…