Ever since I saw the movie Ford vs Ferrari, I had a curiosity about Shelby-American. The more I delved into its history, the more I felt that it was an amazing little company. I made a few posts of it here.

In less than 4 short years, they developed a car – The Cobra – that ended up winning the manufacturer’s world championship, beating the likes of Ferrari and Jaguar. And the Cobra could have gone even further, but for the fact that Shelby was under tremendous pressure from Ford to refine the GT-40 prototype and make the Mustang GT 350 (30,000 ended up being produced). .

Factory efforts to campaign the Cobra ended in 1965, but that is another story.

So I just finished the book Go Like Hell, by A.J. Baime. The movie relied heavily on this book.

END_OF_DOCUMENT_TOKEN_TO_BE_REPLACED

The Ones Who Didn’t Return

I have been doing more reading these last few years, and a book recommended by a fellow Lexican is almost finished. Chickenhawk, by Robert Mason, tells of the author’s journey from Army Helicopter training at Ft Wolters, TX to some of the biggest battles, such as Ia Drang, of the Vietnam War. All from the prospective of an Army UH-1 “Huey” pilot. His story begins with the start of the massive build up, in 1965.

He wrote about everything from the difficulty in training at Wolters, to the stupid stuff like not having any flak jackets – causing the deaths of friends – for months while a neighboring unit 100 miles away had more than they knew what to do with.

And no, the book title is not about what you may think it is.

END_OF_DOCUMENT_TOKEN_TO_BE_REPLACED

Filed under Army Aviation, Books, Heroes Among Us

I am in the midst of reading a book that has a theme that has reminded me of some other books. It is the story of a storm that happened one September day 120 years ago, and of a city that to this day has never quite recovered from it. It is a story of the deadliest hurricane in history and how people in Galveston, TX reacted to it.

Galveston and Houston were in a rivalry as to who would become the primary seaport of Texas.

A hurricane determined the winner.

END_OF_DOCUMENT_TOKEN_TO_BE_REPLACED

Tagged as loss of life

Book Review: The Splendid and the Vile

I have mentioned here quite frequently that I love history, and that the best teachers bring it alive. It is far more than “names and dates”, with which the mediocre teachers adhere.

And there’s plenty of those…

END_OF_DOCUMENT_TOKEN_TO_BE_REPLACED

If you’ve never seen the movie, “The Great Santini,” you ought to give it a look – it’s a fascinating look inside the mind and world of a Marine Corps fighter pilot who’s convinced that he’s God’s gift to naval aviation and is intent on dragging his family along for his triumphant ride around the pond. The lead role is played by Robert Duval, who typically, nails it home – I’ve known guys like his Bull Meecham (and in fact, I knew some of the Marine Corps fighter jocks who play roles as extras in the movie). It’s also an interesting, if tangential retrospective on the state of civil rights in the late ’60s south. It’s also interesting how perspective changes – in my youth, I looked at Duval’s Bull Meecham as a kind of example – the hard-living, occasionally profane avatar of heroic fighter aviation. Now, seeing it from a far different perspective, I see the imperfect father struggling with his own demons while trying to hold a family together in the face of enormous (and ubiquitous) centrifugal forces.

END_OF_DOCUMENT_TOKEN_TO_BE_REPLACED

The Quest for the Perfect Selfie

Lake Louise in an October Afternoon

A few days ago at Lake Louise, Banff National Park, we rented a canoe to explore the placid (and cold) waters. The mornings would be cold – usually 22 degrees F, and you could see the water starting to crystallize into ice. By afternoon the outside temp was around freezing.

The water is turquoise from the glacier-fed waters – with the pulverized rock – as the glacier slowly made its way to the water.

Having been there over the decades twice – but in the summer – I believe October is the best time to visit.

The summer hordes are gone, the air is crisp, and the hotels start their off season rates. By winter temps can drop to -40F.

END_OF_DOCUMENT_TOKEN_TO_BE_REPLACED

Filed under Books, Outside the Box, Small Stuff, Travel

In the latter part of the 1980s, I received a rather expensive lesson. Perhaps it could be said that we all pay in one way or another to get our education. And it was a lesson in how companies, both large and small, can thrive or become swallowed by technological waves.

Because of some pressure by our then-competition, I felt I should design and offer to garages and oil companies a superior PC-Based program that would generate work orders for customers and track inventory.

I set to work for about 5 years.

END_OF_DOCUMENT_TOKEN_TO_BE_REPLACED

To Fly and Fight

I just finished reading the memoirs of Col. Clarence E. “Bud” Anderson, and have to say it was an enjoyable read. It was akin to sitting in a room with him talking about his life.

From putting you into a P-51 cockpit and fighting for your life with a German Me-109 pilot, to being in an F-105 over Vietnam…to a Pentagon desk (and he tells you why some of the military procurements are so expensive…to flight testing at Edwards AFB, you are there with him.

He tells you what it was like to be shipped overseas and on your first combat mission (do five and stay alive!).

It was a great read, and a book I will keep.

It is available on Amazon .

Flying a Mustang in the 357th Fighter Group

I wrote about this the other day a bit –  Since hearing Bud talk about his times flying in the famous 357th Fighter Group, it’s been difficult to put his book down.

I’d like to say that he “puts you in the seat” during a mission into Germany, but I think that is a bit disrespectful to those who fought (and died) performing those missions.

However he sure tells the story well about what it was like to be one of the “Yoxford Boys”.

END_OF_DOCUMENT_TOKEN_TO_BE_REPLACED

Filed under Books, Flying, Heroes Among Us, History, Uncategorized

A Woman of No Importance 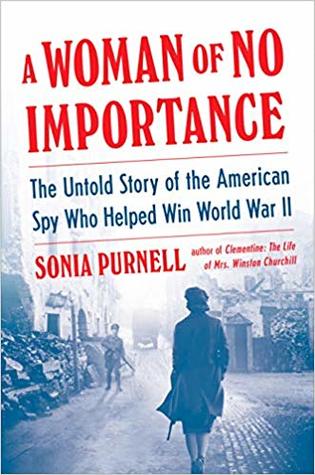 There have been some books that I have had to slog through, sticking with them because they were bogged with minutia but overall  interesting; others I have flown through. This book is one of those that is hard to put down.