Back in the 80s, I had a boss who, during the 1960s, worked at Aerojet-General while they were developing the rockets for the Apollo Lunar Module. I programmed their HP 3000, which was a mini computer – the kind of computer that enabled thousands of small and medium sized businesses who had no hope of having a mainframe to have a computer.

IBM had recently legitimized the microcomputer with their Personal Computer, and they were just startling to make inroads.

People were asking in the very early days what do they do with it? Many salesmen would reply that one could store recipes – to which the rejoinder was “you can also store them in a metal box”.

Anyway, my boss would say that Lotus 1-2-3 (the predecessor to Excel) wasn’t really new  – they had a program on their mainframe at Aerojet that did essentially the same thing – on printouts, of course as there were no CRT terminals.

On the encroaching PCs in the business, he made the proclamation “toy computers – nothing will become of them”.

END_OF_DOCUMENT_TOKEN_TO_BE_REPLACED

Filed under Politics and Culture 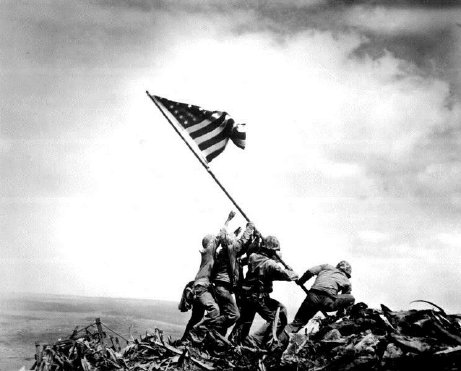 “The raising of that flag on Suribachi means a Marine Corps for the next five hundred years.” — James Forrestal

First off, for those who don’t know me, I am not, nor have ever been, a screenwriter. What I have learned from Robert Avrech, who has won an Emmy (meaning he’s a pretty good screenwriter), is that it is hard work, and opposite to what many may think, nothing  like writing a book.

When I see a TV series or movie that is historically dead-on, I really appreciate the efforts of both the screenwriters and those doing the research for the screenwriters. I am rather disdainful towards those movies that are “inspired” by true events. What exactly does that mean? Their bending the truth a little? Or a lot? We’ve all seen them and to tell you the truth I can’t think of any off hand to link because they are….forgettable.

END_OF_DOCUMENT_TOKEN_TO_BE_REPLACED

…Was an elegant spirit

Over the years I have gained an appreciation of classic Hollywood, largely through 2 cinimaphile friends, screenwriter Robert Avrech and another  friend of some 30 years.

When Robert had a post about Audrey, as is my nature since she interested me, I had to learn more about her. Her son, Sean Ferrer, wrote a beautiful book about her, from a son’s viewpoint who knew her as a mother and friend.

END_OF_DOCUMENT_TOKEN_TO_BE_REPLACED

Which it might be an post-solstice echo of consumerist culture foisted on unsuspecting masses of sheeple by a ruthlessly bottom line-driven consortium of jewellers, greeting card manufacturers and chocolateers, but there’s also a chance that it isn’t – a possibility that the wise man ignores at his peril while performing risk/reward calculus.

Which in our case meant three single red roses (each with a spray of baby’s breath), three greeting cards and one little trifling jewel box with an itty-bitty necklace in it.

END_OF_DOCUMENT_TOKEN_TO_BE_REPLACED

A Bit of Alternate History

I have mentioned this before, but I really enjoy history. I find it fascinating that many times there is such a monumental shift that originated from such a simple thing.

I enjoyed the move Battle of Britain many years ago. IIRC the box office take was disappointing, but in an era before CGI – the Heinkels, Spitfires, and Messerschmidts you saw were real.

END_OF_DOCUMENT_TOKEN_TO_BE_REPLACED

“Aerial view of the Tienditas Bridge, along the border between Cucuta, Colombia, and Tachira, Venezuela, after Venezuelan military forces blocked it with containers, Feb. 6, 2019.” Courtesy Voice of America

The deterioration of their oil industry began with the election of Hugo Chavez.