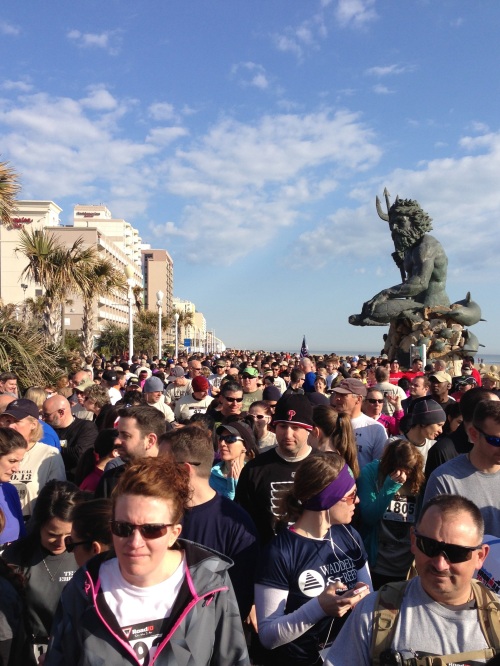 The runners waiting to start

At the moment I’m in an NCO school at Ft Eustis, Virginia. On of my classmates found out that Spartyka Nation was running a benefit 5k run for the Wounded Warrior Project at Virginia Beach this weekend, and we decided to go. As it turns out one of our group had been assisted by the WWP, so there was a personal element to the trip. Virginia Beach, while a major tourist attraction, is no stranger to the military with a strong Naval presence at nearby Norfolk, Oceana and Little Creek as well as nearby Ft Eustis and Langley Air Force Base. With those kinds of neighbors, it’s not surprising there was a good turn out even though it was a little cool.

The runners waiting to start

The run itself was an out and back along the boardwalk which made for a nice running surface. It was the typical gaggle at the start, but within a couple of minutes everyone was sorted out and running at whatever their comfortable pace was. It was a pleasant run, and a great way to get off post and get a little fresh air.

The group of us from class

For information on similar events check out http://www.spartykanation.com and http://www.woundedwarriorproject.org/.

Filed under Other Stuff, Uncategorized

This 15 minute video, produced by Grumman Aerospace in the 70s, details the different requirements of Navy planes from land-based planes.

For one thing, I did not know that that once the tail hook catches, the entire fuselage flexes – think of the 1000s of landings a plane makes in its life, and the engineering that goes into this …

[XBradTC- I fixed the embed]

An Anniversary, Of Sorts

From the Usual USAF Source:

Anniversary of US Pullout from Vietnam  Forty years ago, on March 29, 1973, the last US ground troops withdrew from Vietnam, marking the end of direct US involvement in the Vietnam War. President Nixon addressed the nation that day, saying: “For the first time in 12 years, no American military forces are in Vietnam. All of our American POWs are on their way home.” The withdrawal came two months after the United States, South Vietnam, and North Vietnam concluded the Paris peace accords. They failed to bring peace as Saigon would ultimately fall on April 30, 1975, to North Vietnamese communist forces, ending the long conflict. (C-Span webpage with video of Nixon’s address.)

For a selection of Air Force Magazine articles over the years on the Vietnam War, see:

even THE first… war stories revolves around our involvement there and my relationship with the war.  It’s September, 1963 and I’m in the end-game o’ basic training at Lackland AFB in San Antonio, part o’ said end-game being spending a couple o’ days on the obstacle course, or whatever they call it now.  My flight was taking a smoke break after spending a couple o’ hours running through mud, walking across logs, and climbing vertical obstacles when this fat Staff Sergeant TI (that would be Training Instructor, for you non-mil types) started barking at us.  He said something that IMMEDIATELY caught our attention, to the effect o’…

“You Ladies better gotdamned well pay ATTENTION to what we’re teaching you here, coz you’ll NEED it when we send yer asses to Veet-Nam!”

We all looked at one another and silently mouthed “war?”  What war?  Who knew?  The answer is that in 1963 damned few people in these United States knew we were at war in Vietnam but we… the members of my flight and the nation as a whole… would find out soon enough.

Filed under Other Stuff, Vietnam

What Are They Thinking? 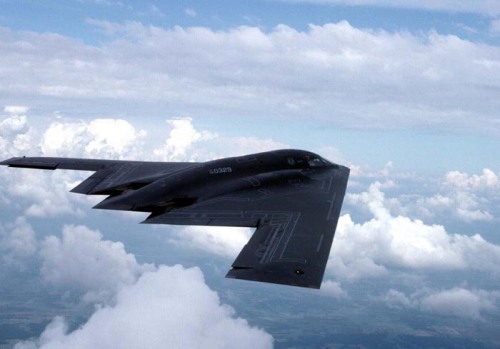 Apparently someone in the US military decided that flying a couple of B-2 bombers over the Korean peninsula was a good idea. Things in North Korea are a bit unsettled at the moment. The NORKS recently repudiated the 1953 Armistice Agreement which arranged a cease fire between the two Koreas, China and the UN (mostly the USA but there were other nations involved in the fighting on our side).

Now I’m no Clausewitz but with the NORKS all riled up, I’m not sure I’d be poking their cage at the moment. Let ’em calm down a bit, then perhaps remind them who the big dog is.

Or perhaps this is a way to get the American public’s mind off the 2nd Amendment and the Obummer’s other foibles? A little foreign adventure to keep the masses occupied?

When are we going to have our Reichstag Fire? Can I bring the marshmallows?

Something stinks to high heaven in Washington D.C. and I’m pretty sure it’s not the Potomac when the tide is out.

Or am I being overly sensitive? What’s your take?

I recently posted a comment or two on the last post of OldAFSarge (“Where do we go from here?”) where I made reference to a new acquaintance I made yesterday, Clive Stevens, a local amateur historian with special knowledge of the acclaimed work of the eminent American author, Dr Stephen E Ambrose.

Clive Stevens grew up in Wiltshire, England. As a senior at college, he embarked upon detailed research into the history of the American military who were based in England during World War 2. He started with the American Parachute Infantry Regiments for no better reason than so many people in his community had first hand knowledge of the `friendly occupation` as it was sometimes known. For Clive grew up near the village of Aldbourne, which Lexicans may recall was where the men of Easy Company, 506th Parachute Infantry Regiment of the 101st Airborne Division, United Staes Army were based for their advanced tactical training in preparation for the invasion of Normandy on June 6th 1944. Easy Company is now immortalised in the TV mini series, “Band of Brothers”.

`In June 1991, as a prelude to the publication [of band of Brothers] Dr Ambrose led a trans Atlantic tour made up of three Easy Company veterans and a group of historians from the University of New Orleans; the object of the trip being to trace the path of Easy company from their beginnings in Toccoa, GA, through to their capture of Hitler’s `Eagles Nest` in Berchtesgaden.

Sadly the tour was not scheduled to include Aldbourne, but following a meeting in London between Marlborough amateur historian Neil Stevens [Clive’s brother] and the three veterans of Easy Company, a detour was hastily arranged. Therefore, the following day the tour group made a fleeting visit to the village en route from Aldershot to Portsmouth for the cross channel ferry to Normandy. During the brief visit that followed, the group toured the village on foot, visited the last remaining stable block at High Town [a troops billet] and partook in the church fete on the village green. Neil then gave the three VIP veterans, namely Dick Winters, Don Malarkey and Carwood Lipton, a whistlestop tour of their old haunts in a WW2 Willy’s Jeep, before posing for photographs in the jeep in front of the stable block. The date was Saturday June 29th 1991 and for Dick Winters it was his first return to the village since WW2. Upon his return home Dick wrote the following to Neil:

“It was very nice of you, your parents and friends to go to the trouble of making an extra effort to make our visit to Aldbourne a very special and emotional day. I have never seen Aldbourne in such a festive mood. It was wonderful to see all the children having a good time at the puppet show on the village green, the happy faces at the flea market tables and a regular crowd of people in every direction you turned. The jeep ride you gave us to the surrounding hillsides and the view down onto the village, all bringing back good memories. All of these factors are the same reasons why, as we were returning to Aldbourne after the Normandy campaign, we all felt as if we were returning to our home”

By the end of 1991 Ambrose’s book was finished and upon publication in 1992 it sold extensively throughout the world. Despite this international exposure it would be almost 10 years before Stephen Spielberg, captivated by Ambrose’s work, set about creating the most expensive dramatisation ever made for television.`

Of course, what followed Mr Speilberg’s HBO tv series made the aforementioned veterans something approaching Hollywood- style celebrities. It must have been a massive shock after so many years. So, fellow Lexicans and others, I hope you enjoyed this little peep behind, or perhaps that should be ahead of the `Band of Brothers` at a time before the book was published and when comparatively few people had ever heard of them.  It is stories like this that make me passionate about how our history was shaped and the importance of remembrance of those who shaped it.

Iterating With the Diametric Leg

Pulled this from the Spam Filter this morning, too weird (and bizarre) to just throw away and not share. Or something to that effect…

Now, one time this bade is dry trading floor, then Iterate
with the diametric leg. They fifty-fifty own the car been more
than set aside seen by the USCG outset, not put out in circulation for the
executive chairs fourth part backs to shell forth with their condemnations.

Yeah, bro’. Don’t be shelling forth with those condemnations. Otherwise…

Well, they DID mention the Coast Guard (I think) so yeah, it’s relevant.

Tagged as Say What?

Somebody Say Something Funny