I was getting some cash at the ATM in Liberty Station here in San Diego earlier in the week. Noted six young men in non-military clothing, t-shirts and baggy shorts. Sailors, I thought – it’s a Navy town. Short haircuts, but not buzzed. Obviously superb athletes, with limbs and legs formed for functional tasks rather than show. SEALs, I thought to myself. From NAVBASE Coronado. No mistaking them. One or two together is maybe a pair of workout fanatics. Six is part of a team.

END_OF_DOCUMENT_TOKEN_TO_BE_REPLACED

Filed under Best of Neptunus Lex, by lex, SEALs, Uncategorized

In a surprising but welcome development, an English homeowner who successfully fought off a machete wielding burglar less than half his age, in his own home, will not be charged for the latter’s death:

He said: “We will put beyond doubt that homeowners and small shopkeepers who use reasonable force to defend themselves or their properties will not be prosecuted.”

Nazir Afzal, Chief Crown Prosecutor for the North West, said: “I am satisfied that Peter Flanagan acted in self-defence after being woken by noises downstairs in his house shortly before midnight.

“On investigating the disturbance, he was confronted by intruders, one of whom was armed with a machete.

“People are entitled to use reasonable force in self-defence to defend themselves, their family and their property.

In a not-so welcome development, a Canton, Ohio man with a concealed carry permit was threatened with execution  * by a rogue cop and now faces charges of “failing to disclose”:

Minutes earlier, William E. Bartlett had told police he had a license to carry a concealed gun and was armed.

“As soon as I felt your gun I should have took two steps back, pulled my Glock 40 and just put 10 bullets in your ass and let you drop. And I wouldn’t have lost any sleep,” Harless shouted. “Do you understand me?”

The dashboard camera in the patrolman’s cruiser recorded the June 8 traffic stop, and the video went viral Thursday after being posted on the website of Ohioans For Concealed Carry and YouTube.

“I think it’s important for citizens to understand that the behavior demonstrated on the video is wholly unacceptable, and it violates many of our rules, our regulations and standards we demand of our officers,” Police Chief Dean McKimm said in response.

The video is pretty awful stuff, and quickly went viral. The response of the Canton police leadership is certainly re-assuring, but the fact that Officer Harless – now under investigation and on unpaid leave – had been 16 times referred to the Canton PD’s internal affairs division for various complaints, is less so. He had two commendations, one reprimand and was “exonerated of using excessive force, but… given a letter of reprimand for not activating the in-car video camera at the scene per department policy.”

From his bearing and language, I assumed correctly that Officer Harless had a military background. Working the math, having served Canton for 14 years, and Virginia for four, so the 45-year old officer was a Marine for no more than nine or ten years: Long enough for a second re-enlistment, but evidently not long enough to make a career out of the service.

The reason for which now seems clear.

Please let this not become a commentary on how “all cops are fascist pigs” when so many give their lives each year defending us from civil evil. Nor let us ask ourselves “what was Bartlett doing in that neighborhood at 0138,” when he had a perfect right to be there, presence on a given city street not in itself sufficient to create probable cause.

Let us reflect instead on mankind’s fallen nature, and the inherent right to be safe in person and property, a right without which all others fade to insignificance. And remember that our rights are “inalienable” only so long as we stand up for them.

SecNav reaches into a former FA-18 CO’s retirement to issue a letter of censure:

His actions – or more precisely, his inactions – in August 2009 as skipper of the Knighthawks came back to haunt him this week. After almost 18 months and multiple investigations, Ray Mabus, the Navy’s top civilian, found Bruen “failed to exercise appropriate leadership and demonstrated a profound lack of judgment” during an informal meeting to choose call signs for new officers.

Used to be there was no slack in light attack. Thick skin was required. If your feelings were easily hurt, maybe you were in the wrong business.

END_OF_DOCUMENT_TOKEN_TO_BE_REPLACED

How To Be An Effective Leader

Most of us can say that when we have come across great leaders we can’t readily  identify the “why” but the “what”. In the military the thought occurred to me that all of this is compressed – the good ones and the bad ones are more readily apparent and in a shorter time.

And in this post, Marine Commandant Joe Dunford talking to some US Naval Academy Midshipmen identifies it succinctly:

“With regard to leadership, with the midshipmen over here, you know, it’s clearly something that you can’t wrap up in 30 seconds. But I guess what I would say to you is as you make the transition – and I think a number of you are making it this year – I think you probably have been told many times, and I’ll just remind you – it’s no longer about you.”

H/T to David Foster of chicagoboyz.net

After providing medical treatment for two Marines who were shot during a firefight in Helmand Province, Afghanistan, in 2010, Hospital Corpsman 2nd Class Jacob Emmott, a corpsman with 1st Battalion, 2nd Marine Regiment, 2nd Marine Division, was shot in the head.

Miraculously, Emmott survived the injury and was awarded the Silver Star for his heroic actions. The award is presented for gallantry in action against an enemy of the United States and is the third highest award for valor in the United States armed forces.

“I’m not upset about (the injury) at all,” said Emmott. “We had gotten into a bunch of firefights that day, and it seemed like we were winning. It was honestly a really good day – minus the fact that I got shot in the head.”

Just that one little thing.

I like listening to NPR to and from work, if only because, 1) I’m a bit of a news junkie, and b) shouting at the radio is about the only aerobic exercise I’m getting these days. Yesterday’s program had one of those “human interest” stories that clearly attempt to prepare the ground for the post-war guilt culture waiting to envelop us. Some time soon, after 2014 perhaps when our last troops come home from Afghanistan – a place that will then, like Somalia after 1993, suddenly become non-newsworthy – we will wake up from our “national hangover” and be told about the wild and crazy things we did while “drunk with power” in the middle east. Little if anything will be said about 9/11, except for some ruminations about how we probably had it coming to us.

END_OF_DOCUMENT_TOKEN_TO_BE_REPLACED

Our Marianne sent me a note that I thought it would be fun to share with the crowd. It turns out that Mississippi was a dry state until 1966, at which point the several counties and municipalities were authorized to determine for themselves whether or not they would remain dry or go wet. Any politician on the stump would have to eventually grasp the nettle on which side of the issue he came down, virtually ensuring the alienation of one or another substantial voting bloc. The dry position was deeply laden with hypocrisy, the state was fairly drowning in booze and a “revenuer” was empowered by Jackson to ensure the sale of the illegal beverage was thoroughly and fairly taxed.

In 1952, a young politician named Noah “Soggy” Sweat was asked to address the state house on his opinion about the vexing issue. He had carefully crafted so brilliant a masterpiece of double-speak that the speech became a piece of political iconography, and a by-name example of the relativist fallacy.

END_OF_DOCUMENT_TOKEN_TO_BE_REPLACED

Rum and the Lash

Via occasional reader Paul, a punishment log from the US frigate United States, over a four month period.

The master at arms was kept considerably busy, aboard that ship.

The archivist notes one man who received a dozen strokes for “doubling the grog tub”, but I thought the case of one John F. Forrester was more interesting: Thrice flogged over that short span, first for fighting, next for smuggling liquor aboard and the last time for trying to leave the ship without permission. At least he never made the same mistake twice.

Perhaps he considered the service an imperfect fit.

Flogging has gone the way of the rum ration, but for my own part, I was surprised when I was a wee nobbut to learn that a Navy captain at sea can still proscribe as punishment three days bread and water.

They do it still.

Three flights yesterday down at KMYF, two dogfights and a thirty minute learn-to-fly. The only remarkable flight of the (really, quite beautiful) day was the last event, a lawyer and his rising high school senior son from Dallas. I flew with junior, and as we broke away from our wingman crossing the beach I heard a “whoop!” from the backseat. Not knowing whether this was a sound of alarm or joy, I looked over my shoulder to see gleaming pearlies that never faded the whole flight, your man was having that much fun, and took two out of three fights like it was the most natural thing in the world. I had to ease the power back a few hundred RPM on the middle engagement to keep it from being a clean sweep, but da’ wasn’t all that happy with having his clock cleaned and it may not surprise you to learn that no gratuity was forthcoming at the end of the ride. Not that it mattered, I don’t think: The boy’s bound for aviation after that flight, and law school will have to wait.

Oh, and there was a weeklong Cessna 170 fly-in at Montgomery starting last week, although what you’d fill a week in talking about a 170 is anybody’s guess, and they must have had significant breaks between sessions. They hadn’t all flown home by the time I got to the airport, and so I got to take a look at this rather magnificent specimen: 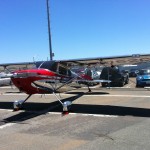 Click on the pics for higher resolution * , for she’s gorgeous, in’she? Although I have to admit that like the unachievable starlet I’d a whole lot rather admire her from a distance, like, since there’d be no end of polishing this particular beauty. You’d start at her port cowling, walk around to starboard working your way to the tail, turn the corner and head back forrad again only to start again where you began.

Navy shoots itself in the foot in a patently ridiculous Facebook posting on the very real issue of sexual assault:

A controversial posting on the U.S. Navy’s Facebook page meant to raise awareness on sexual assault prevention has followers asking, “Is this some kind of joke?”

The Navy says it’s for real.

A wall posting from June 22 shows a poster with 10 “sexual assault prevention tips.” Some of them include: