Tuition for a Taco

Have you ever had a friend you have known for a long time – 30 years or more – for which you could always reconnect no matter how long you hadn’t seen each other?

END_OF_DOCUMENT_TOKEN_TO_BE_REPLACED

The interesting thing about history is that some events have been known, well, since the event. Whether it was 100s of years ago or a few days ago. Sometime ago, I read an excellent book on the history of the First World War. Also known as “The Great War”, or the “War to End All Wars”.

Along with the history and origins of the Spanish Flu, the author went into great detail on the unofficial Christmas Armistice that broke out all up and down the line of the Western Front on Christmas Eve, 1914. German and British soldiers with hesitance came out of their trenches and sang together and exchanged simple gifts. Even had a few football matches amid the barbed wire.

Other bits of history, long suppressed and known only to the few who were there, come bubbling to the surface years later through the remembrances of one of the principals.

I wrote about one of these times that became known 50 years later, when the “puzzle was finally solved”.

This is another one of those incidents, remembered by a man who then was a 12 year old boy. It only became public through a 1970s Reader’s Digest story.

He and his mother were waiting for their father to return to their cabin in the forest, when they had some unexpected visitors. And for one cold and snowy evening all hearts were open to the true meaning of Christmas.

Whether you are the man for whom this site is dedicated, and on a Christmas Eve in 2008 had “had a hole in his life that would not be filled on this side of the veil“, or a serviceman (or woman) “on the line” today somewhere in the world thinking of home and loved ones, may you find joy and peace.

All In the Attitude

I have known him since he had a slight condition of something which was undiagnosed .

From his needing a cane and thinking it was multiple sclerosis, to the right diagnosis of ALS a.k.a. Lou Gehrig’s disease .

Through it all, you’d think he didn’t have a care in the world.

He has always been in good cheer with a smile .

After 25 years he needs to ride on a motorized device with a specially equipped van.

I have never seen him feeling sorry for himself or in bad spirits.

Told his mother sometime ago that he is an inspiration for mankind.

Going through life you meet people with not 1/10 of his problems feeling like it’s the end of the world. Letting others know it.  

Something I read some years ago always stayed with me: that we think we are a physical body housing a spirit.

But we’re really a spirit surrounded by a physical shell.  

And Luke has a beautiful spirit that shines through that broken shell.

I’m proud to call him a friend.

To the reader: Some years ago, one of Lex’s friends  wrote a beautiful tribute to him.  With his permission, here it is.

END_OF_DOCUMENT_TOKEN_TO_BE_REPLACED

Not going anywhere for a while:

Dog squeeze, for a new transition pilot in other words. In the meantime, I’m catching up with a former shipmate.

Some of you may have read his words before.

Post quantity (and quality?) has been trailing off of late, for your host is madly busy tipping it the entrepreneurial, albeit at a remove. Hisself being but a mere employee of the actual entrepreneur. ‘Twas a short work week though, leading into a travel week coming up, as we sally forth to Naval Air Station Patuxent River, Maryland for to convince the aviation set that 1) they really want to be on the Global Information Grid, and 2) we are the ones that can most efficiently provide them an on ramp. In between that and this was an intervening weekend.

END_OF_DOCUMENT_TOKEN_TO_BE_REPLACED

Maybe it’s the Navy life, constantly moving from place to place, leaving old friends behind, making new ones, starting again. Or maybe it’s just a part of who I am, I don’t know. But I’ve never been particularly good about keeping up with old friends. I’ll see men I’ve known for twenty years or more at Tailhook for example, and embrace them like brothers. We’ll catch up, move on, see you next year. Never an email or a phone call in between, but nothing fundamental will have changed  – we’ll pick right up where we left off, another year older.

I was surprised to receive an email from my academy class secretary saying that Jim Hogan had gone missing  * on Curacao, having been employed in consular duties since 2005.

Jim had been one of my closer friends at the Boat School. A gregarious son of Ireland, he should have been an English major. He had an encyclopedic knowledge of Shakespeare and Yeats and enjoyed palavering over a pint of stout on the weekends more than the run-of-the-mill bookish/engineering types that surrounded us. Unless I’m mistaken, it was he who discovered a little known regulation in the midshipman instructions authorizing second class mids – ordinarily restricted to the Yard apart from weekends – off-campus liberty from the conclusion of our Wednesday afternoon formal parades until evening meal formation. The parades generally concluded around 1645, so it was a mad dash back up the ladders to our rooms in order to rip off our monkey jackets, throw on a shirt, tie and our service dress blue blouses over our high-waisted parade trousers and race to a little pub outside Bilger’s Gate. Moving as quickly as possible without quite seeming to be running. While anyone was looking. Because that would have been considered undignified.

Somewhat fortified in spirits, but red-faced from our exertions, we’d race back again to be in formation by 1830, a trickle of perspiration going down our collars, but with laughter in our hearts. Feeling like we’d stolen something from Mother B.

Who had it coming.

Jim played rugby, which cost him his knees and almost cost him an ear in one particularly brutal scrum. He was tenacious – some might say stubborn – and stayed in the engineering track long after it had become clear that it wasn’t a good fit for him. As a result, he wore a thin midshipman’s stripe in the sword arch at my marriage, rather than the fat gold ensign’s stripe that the rest of us wore. He was the only guy I’d ever heard of that the school let graduate late.

We kept in touch from time to time in our early years after he was commissioned and went through flight school. He got helicopters in Sandy Eggo while I was up in Lemoore flying Hornets. Our contacts grew less frequent over the intervening years, and the last I had heard of him was when we were both commanders, he was serving in a diversity billet on the BUPERS staff, the irony of which – knowing Jim as I did – was by no means lost on me. He’d looked me up in the database and cold-called me. We promised to keep in touch.

I didn’t know when he retired, had no idea that he’d joined the foreign service and now it appears that something dreadful has befallen him.

I’m past the age now of losing friends in airplane crashes. Not quite to the stage where I’m accustomed to losing them from natural causes.

I guess I thought we all had more time.

Update 05-27-18 as of 2013 it appeared that his wife was charged with obstruction the investigation . She was later sentenced to one year and a day for obstruction.  But the mystery as to his whereabouts remains open. Lex got me curious! – Ed

One of my minor regrets in life was my nature of being a bit too “practical” and cautious during my youth. Particularly when it came time to pick cars. I can remember for my first car – with an open mind – looking at a 1962 Alfa Romeo Spyder in 1969. 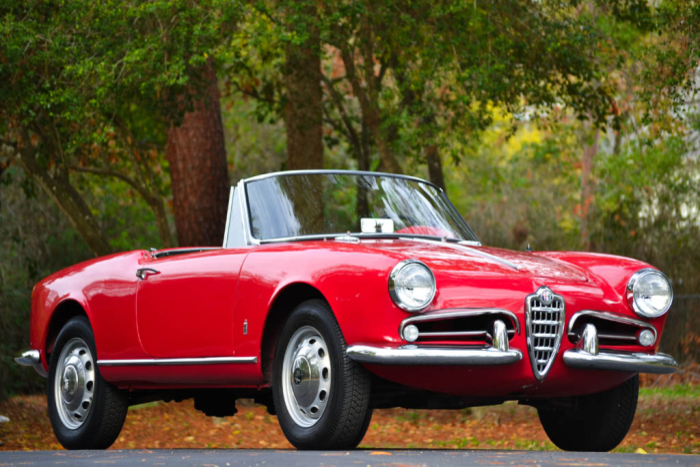 The engine made a sound – bellissimo – some have compared it the most beautiful this side of a classic Ferrari V12 – and all I could think about was “where am I going to get it serviced? “

END_OF_DOCUMENT_TOKEN_TO_BE_REPLACED

Apart from being the principle breadwinner at Chez Lex, among my household chores includes picking up the mail from a drop box up the street. In this duty I am inevitably assisted, accompanied and abetted by Gus, the dachshund.

END_OF_DOCUMENT_TOKEN_TO_BE_REPLACED

That being said, Missus ORPO and I send Best Wishes for an Outstanding New Year!

I wish The Captain and MSGT Buck were still here………….Yeah, I miss both of them. So I did have a little toast to both of our dearly departed friends……………………………gettin dusty in here all of a sudden.