Two hundred and thirty one years, and still going strong. I tell you it’s an inspiration to us younger services.

Boots on the ground indeed. All over the place, these days. Good on ‘ya.

The Army’s first active duty blind officer, * and – I believe – a better man than me.

** 02-12-21 – Lex had a video link in that required Adobe Flash, and my original impulse was to pass this one up. It was just the one sentence plus the unavailable video. But now Major Smiley is an extraordinary man, and should be included. Anyone Lex admired should be included, I think – Ed.

A bit more on Scotty:

The economy is down, so military recruitment is up. But the Army has turned away people with specialized skills.

The United States army is to accept immigrants with temporary US visas, for the first time since the Vietnam war, according to the New York Times.

Until now immigrants have had to have permanent residency – a “green card” – in order to qualify for the services.

But those with temporary visas will be offered accelerated citizenship if they enrol, the Times says.

The programme will be limited to 1,000 enlistees in its first year, but if successful could be spread to other services and expanded. It could eventually provide the army with one in six of its recruits, the Times said.

An Act of Chivalry and Nobility Amid the Carnage

For those you who have used the Internet awhile, you probably heard the story decades ago. Probably in the early 90s. The interesting thing about this is that when it was revealed it was a mystery solved after 47 years.

In the darkness of a December 20, 1943 morning in an English side Quonset hut, an orderly shined a light into the face of Lt Charles “Charlie” Brown to tell him that it was time to get up and attend the briefing.

Members of the 379th Bomb Group of the mighty 8th Army Air Force were to receive their briefing for that day’s bombing raid.

They were to bomb the Focke-wulf aircraft factory on the Northern German coast at Bremen.

They were told to expect heavy flak and hundreds of fighters in opposition. The CO giving the briefing, Col “Mo” Preston, would be leading the massive formation. He was no commander who led from the desk.

Although LT Brown and his crew had trained together and had 100s of hours stateside in the Flying Fortress, this would be his first bombing mission with that crew. After 100s of hours, the crew became as a family.

At Bremen during that same hour, a German Luftwaffe Leutnant, Franz Stigler, was most likely sleeping. They wouldn’t know about the raid until hours later. The B-17 crews deliberately had no radio communication once they started up on the tarmac.

Because the enemy was listening.

END_OF_DOCUMENT_TOKEN_TO_BE_REPLACED

An SA-7 was fired at a US Apache helicopter over Sadr City recently:

The attack, which had not been disclosed previously, represents the first time that a helicopter has come under missile attack in Sadr City since fighting erupted in the Shiite enclave in March.

The missile missed the aircraft…

The United States military has made extensive use of Apache helicopters to try to stop militias from firing rockets at the Green Zone and to protect American and Iraqi troops in Sadr City from Shiite fighters armed with small arms, rocket-propelled grenades, mortars and roadside bombs.

The helicopters have taken a heavy toll on the militia fighters. In an effort to blunt the American advantage in airpower, the militias have waited until dust storms have grounded the Apaches to unleash heavy rocket attacks on the Green Zone.

But the attack on Saturday suggests that the militias may intend to make a more determined challenge to the American dominance in the air.

I wonder where the JAM came across one of those? I somehow doubt it has been lying around the Baghdad slum in a packing crate since 2003.

I never earned the Silver Star, not in 30 years of wearing the uniform. Never really came close. Monica Lin Brown has earned it at age 19:

Monica Brown, a medic, was part of a four-vehicle convoy patrolling near Jani Kheil in the eastern province of Paktia when a bomb struck one of the Humvees on April 25, military officials said.

After the explosion, she braved insurgent gunfire and mortars to reach five wounded soldiers. She shielded them as she administered aid and helped drag them to safety, the military said.

“I did not really think about anything except for getting the guys to a safer location and getting them taken care of and getting them out of there,” Monica Brown told The Associated Press on Saturday from a U.S. base in the province of Khowst.

The world would forever be changed.

This post details a bit about that War behind that Armistice.

As I have gotten older, I’ve noticed that I frequently reminisce about times years ago. Times that when I was living them, didn’t see any specialness to them.

Vienna fascinated me. And the heart of downtown Vienna is a walk known as “Der Ring” – The Ring – a.k.a. Ringstrasse. It is a beautiful circular walk aligned with parks about 6.5 km – 4 miles. As the name implies, you finish where you started.  I can remember one park with a stand where Johann Strauss used to serenade Viennese on warm spring days. There was the magnificent opera house. And all of those grand old buildings and palaces! With just a bit of imagination, I saw Strauss playing those waltzes in grand ballrooms and chandeliers, with 100s of formally-attired couples dancing.

But something seemed to be missing around them.

END_OF_DOCUMENT_TOKEN_TO_BE_REPLACED

One of the things I love about travel is the misconceptions finally corrected. You see things – or meet people – that change your beliefs. Both people and places have changed my outlook over the years.

“Travel is fatal to prejudice, bigotry, and narrow-mindedness, and many of our people need it sorely on these accounts. Broad, wholesome, charitable views of men and things cannot be acquired by vegetating in one little corner of the earth all one’s lifetime.”

I was trying to remember the year I drove to Deadwood, SD and across Montana. Montana still had a “safe and reasonable” speed limit, and I thought that I would be in my element.

END_OF_DOCUMENT_TOKEN_TO_BE_REPLACED

Last time I mentioned a bit of how I came to be in the Army.

The Monterey Historic Races every August is an amazing event, if you have any gearhead in you. Over the years, I have seen them honor various marques, and the factories have flown their historic cars out to show them on the track.

Two of my most memorable times there were when they honored a man many consider to be the greatest driver of all time, Juan Manuel Fangio. He was at a table signing the posters that were given us, and I didn’t want to wait behind 20 others. Maybe I can attribute that to my Army days of so many lines.

Then there was the time that Audi, being honored one year, flew out their Auto Union 16 cylinder GP car and Daimler flew out their GP car to then to be together on the track; perhaps for the first time since the 1930s.

But that road to Laguna Seca racetrack also makes me a bit melancholy. You see, if you want to avoid the traffic getting there, you take the “back way”, the Salinas exit on Highway 101. And on the last turnoff to the track, you pass the remnants of what was the US Army’s Ft Ord.

END_OF_DOCUMENT_TOKEN_TO_BE_REPLACED 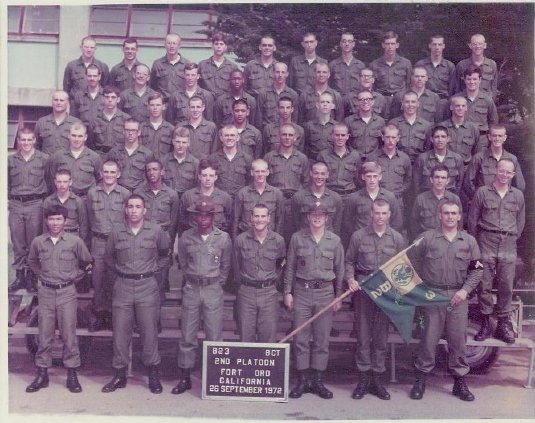 We were talking in the Facebook Group today about stories of our Drill Sergeants we knew in the military, and I mentioned mine. Thought I would reprint it here, and of course I can’t just mention that without mentioning a bit more.

I’m really easy to spot in the above picture of all those shaven heads, once you know my background.