The MiG-21 Fishbed is heading towards parking for the last time, after 50 years of bringing the close-in heat:

An icon of the Cold War, the MiG-21 came to symbolize the military might of the Soviet Union as it squared off against the West in conflicts from Vietnam to Africa and the Middle East.

Now, exactly 50 years after it entered service, the jet fighter is approaching the twilight of its career in frontline service – with NATO, the former Soviet Union’s main rival.

The rugged and agile jet earned a reputation as a versatile and effective short-range interceptor with low operating costs and excellent performance. Just like the Kalashnikov AK-47 automatic rifle – another robust and reliable weapon that epitomized Soviet power – the MiG-21 holds a unique place in military history.

As a point-defense fighter, it was indeed a Platonic form. Although the idea of building a fighter capable of defending its own airstrip does carry some ontological baggage.

The jet was cheap, relatively easy to fly, uncomplicated and could go like a striped-assed baboon, albeit over very short distances. Like most delta wing aircraft it had one good turn, but in the hands of a skilled operator it could do wondrous things in a slow speed fight with the flaps punched down.

F-8 jocks thought it all good sport, while carving out a 19:3 kill ratio. The Phantom bubbas had a bit more on their hands, with a platform that had been built as a missile truck, but lacked an internal gun. USAF and Navy kill ratios hovered around 2:1, which mean that in fiscal terms at least, we were getting our asses kicked by third world gomers. It was too much to bear.

Too much for the Navy at least. The sea service stood up a blue ribbon commission to study the Fishbed’s performance, and ended up dwelling more on the US fighter pilot’s understanding of his own weapons system. Energy-maneuverability diagrams came next – a USAF innovation that sought to understand areas of relative advantage, but failed to incorporate the intimidation factor of a jet that could break hard and still point the nose at 80 knots – a capability the lumbering Phantom, for all its advanced weaponry, manifestly lacked.

Captain Frank Ault led the Navy where it did not want to go: Train like you fight, fight like you train. The Navy Fighter Weapons school was developed to let guys who had seen the wolf show the nuggets what was what. The better you could simulate the stress of an actual combat environment, the longer a new guy lasted in actual combat, the better his chances were of doing something useful. Navy kill ratios rose to 12:1. We were back in the game.

We didn’t have a jet like the MiG-21 to train our fighter jocks in when I was in the nav. The F-5 made a pretty good high speed simulator, but once you’d raced a guy down and put your best turn on, pretty soon it was bone-jarring buffet. The nimble A-4 Skyhawk couldn’t (safely) go through the number, but in a slow-speed fight it gave many a Hornet and Tomcat pilot more than he had reckoned on. Especially with the slats hooked out and one-third flaps. Half flaps once you’d gotten into a flat scissors. The Fishbed ably covered both sides of the E-M diagram.

We used to dream of fighting Fishbeds. The Patch still shows one in the gunsight to this day. 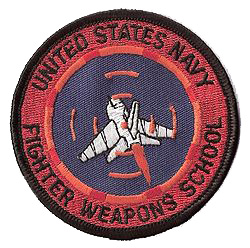 A noble adversary. One you could beat, if you were on your game. One that would beat you if you weren’t.

One response to “Fishbed Sundown”