This stretch of Rt 66 to Holbrook, AZ was active from 1926 through 1958. It was the only section of Rt 66 that went through a National Park. (Painted Desert). Today only the old telephone poles remain, with the pavement under the dirt and sagebrush.

Coming back from my latest drive, I had a number of misconceptions cleared. In addition to a few historical misconceptions, from Judge Roy Bean to the Alamo, a highway surprised me.

Coming up through New Mexico I saw a sign for US Route 60.

U.S. Route 60 or U.S. Highway 60 (US 60) is a major east–west United States highway, traveling 2,655 mi (4,273 km) from southwestern Arizona to the Atlantic coast in Virginia. The highway’s eastern terminus is in Virginia Beach, Virginia, where it is known as Pacific Avenue, in the city’s Oceanfront resort district at the intersection of 5th Street and Winston-Salem Avenue. Its original western terminus was in Springfield, Missouri; it was then extended to Los Angeles, California; but in 1964 it was truncated to end southwest of Brenda, Arizona at an interchange with Interstate 10 (I-10) after the US 60 highway designation was removed from California. Some US 60 signs can be seen at this interchange about 5 mi (8.0 km) southwest of Brenda. I-10 replaced US 60 from Beaumont, California to Arizona, and California State Route 60 (SR 60) replaced US 60 from Los Angeles to Beaumont.

When I was 12, I went back to my aunt and uncle’s farm in West Virginia for the first time since I was a baby. I can remember flying on a TWA 707 that went to Cincinnati, where I spent the night at my aunt’s sister before my aunt came down from Huntington to pick me up.

On my “Loop around America“, I decided to visit my aunt, who had suffered a stroke a few years before. And to get there, I decided rather than simply drive on interstates, I would recreate that drive from 1962.

I caught Rt 60 from Cincinnati and it was a beautiful drive down the Ohio River to Huntington. I stopped at historic old towns on the river from the 1700s, learning that there was a lot of commerce there even long before Ohio was a state.

Rt 60 through Huntington, WV was (and is) a major artery. It goes right through town, turning into 5th Avenue downtown going west and 3rd Avenue going east. Go down 5th Avenue and just out of town is the historic town of  Barboursville , into Charleston, along the Kanawha River and up into the Blue Ridge Mountains and into Virginia.

What I didn’t realize until a few days ago is that it ends in Virginia Beach as Pacific Avenue and, until 1972, started in Los Angeles. (depending on your coastal perspective 😉 )

It was started the same year and month, November, 1926, as the old Rt 66. And 66 wasn’t really transcontinental, running from Chicago to Los Angeles. I guess before the Interstate system, our major highways were “Routes”. Or was this momentous date in 1926 the first time the Federal Government consolidated all of the roads and started a numerical Highway system?

But I came to know the Virginia-West Virginia section of Rt 60 quite well.

I was very close to my aunt and uncle, and I must have made a few dozen trips on Rt 60 to Huntington. It was about a 350 mile drive each way (all for a weekend – I was young!). I can remember 1 winter with snow and all the switchbacks in the mountains, jackknifed rigs, it took me 14 hours to go back,  but 8 hours was the norm.

My aunt in 2006. She had suffered a debilitating stroke a few years earlier. I decided to visit her on my cross country trip, and got to tell her what she and my late uncle had meant to me. Their home was my “home away from home” for many years. She suffered a massive stroke just a month later and passed away.

I-64 wasn’t complete through the WV mountains, and I’d catch 60 after driving south on I-81 to Lexington, then go through mountain towns like Clifton Forge and Covington in Virginia into West Virginia.

You’d pass 2 grand old resort hotels – the Homestead in Virginia and the Greenbrier in West Virginia.  Rt 60 then took you by  Hawk’s Nest in West Virginia, with a spectacular view of the New River 500′ below.

You’d eventually go down into the Kanawha Valley and Charleston, where I’d catch the completed portion of I-64 to Huntington.

Then I’m also very familiar to Rt 50. It starts in West Sacramento and for 3,073 miles meanders through the US to Ocean City, MD. 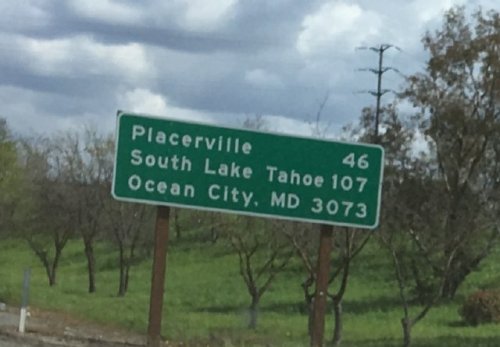 Historic Hwy 50 starts in West Sacramento. Up the Sierra foothills to the historic mining town of Placerville (formerly called Hangtown), then Tahoe…all the way to Ocean City, MD.

And in California through Utah it follows the old Pony Express Trail.

I haven’t been on it past Salt Lake City (and through Utah that was years ago), but through Nevada are some interesting old towns.

If you leave it from Sacramento, you follow the old stage coaches and Pony Express over the Sierra Summit, past Strawberry, down into the Tahoe Valley and South Lake Tahoe.

Once past Tahoe, you go down a couple thousand feet on the Spooner Summit, then through the historic towns of Carson City and Virginia City.

Once you get past Fallon, the long and straight sections gave it the title of “America’s Loneliest Road”.

You’ll go through the historic old silver mining towns of Austin and Eureka. Mark Twain mentioned these towns in his book Roughing It.

I can remember stopping in an old saloon in Austin and with the bar and creaky wooden floors, thought it was 1860.

Ely, an old mining and railroad town, hosts what was until 1931, Nevada’s tallest building, the Hotel Nevada. Have to put staying there on my list.

I guess I could go on and on with these old Highways but I want to talk a bit about the old Rt 66.

It has always held some fascination with me – travelling on I-40 across the Texas Panhandle (together with I-5 from Stockton to the Grapevine is one of the most boring and mind-numbing drives), but on I-40 I could see at the time old 66 right beside us with old abandoned Whiting Brothers service stations.

With so many of these old highways to explore, why the world-wide fascination with Rt 66? And it officially isn’t Rt 66 anymore; the highway being officially decommissioned in 1985.

What I am saying is certainly not a critique of anyone who loves “the mother road” (and why do they call it the mother road? ), but more an attempt to seek an understanding.

Because there are plenty of old cafes, motels, and towns worth exploring on our other routes.

The Europeans in particular seem crazy about this road.

A poster seen in Amboy, CA during my drive a few weeks ago. It is from a group in the Czech Republic offering a Rt 66 “Get-Together” in Zlin, Czech Republic August 7-8, 2020!

It had a thin curtain, so at night I saw the curtain go from bright red to green with the flashing neon sign out front. The mattress was thin and bed springs weak,  and I thought I was going to hit the floor.

The walls were those concrete cinder blocks and the only electrical outlet I could see for easy access was in the bathroom by the mirror.

The wall air conditioning rattled and wheezed all night that, with the curtain,  made sleep a questionable activity.

Yep, I had forgotten all that from the 50s.

We romanticize that time, but I can imagine on any summer day from the 20s through the 50s having children in the hot (no air conditioning) car after hours of driving crying to the harried parents demanding to know “are we there yet?“. Imagine driving on that section through the Painted Desert with no a/c in the summer.

I think the most interesting parts of old 66 are through AZ and NM, although admittedly I haven’t driven on 66 outside that area.

I’ll have to admit there is some interesting stuff but others seem “kitschy” and borderline tacky. A lot of places seem worthy of visit, even without the derelict looking 50s cars parked on the premises. I’m not going to post links for these as I don’t want to offend people trying to make a living.

But they are widespread.

One of my favorite places on old 66 is here. They aren’t trying to sadly recreate the past (because you can’t), but evidence of their glorious past is everywhere. When I came in a few weeks ago their parking lot was full, save for one space. In addition to tourists, a lot of locals eat there.

You can’t recreate the past, but you can honor it. Some places try to recreate it. And that, to me, is sad.

Still, one day I wouldn’t mind driving the whole length.

One response to “Highways Through Time”