It occurred to me today that along with all of these veterans of WW2 who have left us, there’s probably a million stories they had that went with them. Stories that only they – or their comrades – knew now gone. My father told me next to nothing about his WW2 and Korea service. Despite my asking many times. Sad to say, but we didn’t really have a close relationship. I never understood why he didn’t want to go camping with me, until my mother told me that he lived in a tent in Korea for 2 years.

I learned a bit from my mother about my father since he died.  As I had mentioned, if he hadn’t had his accident at Ft Benning – trying to help a scared friend and tumbling out the door head first (“you always look at the horizon when exiting!“) – with his unit later going to Sicily on a mission and suffering 80% causalities, I probably wouldn’t be here.

Similarly, I’d probably be at least 3 weeks younger had he not gotten orders to report to Ft Lewis when the North Koreans crossed the 38th parallel. According to my mother, it upset her so much she went into labor early. The recall was so fast – and chaotic – that 1 guy was recalled to an infantry unit who had his trigger finger shot off in WW2. The invasion took the leaders completely by surprise.

END_OF_DOCUMENT_TOKEN_TO_BE_REPLACED

Whatever His Reason, It wasn’t Stolen Valor

There have been a number of books that I have read over the years that have left a mark on me. Some years ago I read a book by James Bradley about his father John. 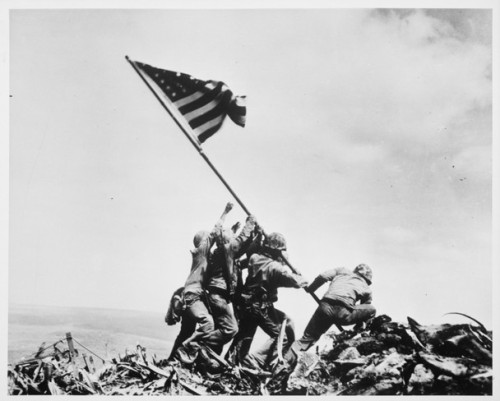 John was a Navy Corpsman on Iwo Jima. As I remember the book it wasn’t until his father, a funeral home owner in the Midwest, died and they went through some of his papers in the attic that they had any idea of his background.

END_OF_DOCUMENT_TOKEN_TO_BE_REPLACED

Filed under Heroes Among Us, History, Marines, Navy

On this day in 1974, for those who keep track of such things…

…this humble scribe was introduced into the manliest of manly institutions for the purpose of becoming a mean, green, fighting machine. Be durned if’n the time don’t fly. 38 years gone by, and a world of experience to show for it. Remembering a cute poster floating about Facebook the last couple of days:

“When I was a kid, I wanted to be older. This sh!t is not what I expected…”

From the Halls of Montezuma,
To the shores of Tripoli;
We fight our country’s battles
In the air, on land, and sea;
First to fight for right and freedom
And to keep our honor clean:
We are proud to claim the title
Of United States Marine.

Our flag’s unfurled to every breeze
From dawn to setting sun;
We have fought in every clime and place
Where we could take a gun;
In the snow of far-off Northern lands
And in sunny tropic scenes;
You will find us always on the job
The United States Marines.

Here’s health to you and to our Corps
Which we are proud to serve;
In many a strife we’ve fought for life
And never lost our nerve;
If the Army and the Navy
Ever look on Heaven’s scenes;
They will find the streets are guarded
By United States Marines.

There’s a fourth verse, unofficial of course, but it deserves mentioning. We’re all friends here. Right?

Again in 1941, we sailed a north’ard course
and found beneath the midnight sun, the Viking and the Norse.
The Iceland girls were slim and fair, and fair the Iceland scenes,
and the Army found in landing there, the United States Marines.