A Couple of Stirling Moss Stories

With the news that Sir Stirling has passed away at 90, Motorsports lost a motor sports icon and a true gentleman.  It has been said that he was one of the greatest drivers who never won a Formula 1 championship.

It was said that he never won the F1 title because he was too much a gentleman.

“…But a patriotic commitment to British cars in his early career, and a sometimes too-gentlemanly approach to competition, meant he never won the F1 title, nor did he ever win at Le Mans. Unlike some drivers, Moss would never drive in an unsportsmanlike fashion, let alone take out a teammate, as a couple of more recent F1 champions did to win their titles. Moss was, from the beginning and throughout his life, a gentleman…

…For instance, Moss lost the 1958 championship by a single point to Mike Hawthorn, but had lobbied to get his rival reinstated at the Portuguese Grand Prix after Hawthorn was disqualified following a spin, which would have cost Hawthorn six points. The magnanimous gesture cost Moss the title but won him the hearts of racing fans the world over, and especially in his native Britain.

He drove for a number of manufacturers – Aston Martin, Jaguar, Maserati but what I remember him most for was his association with Daimler-Benz. And of that association, one particular race. And I believe the marque was special for him. He went on countless goodwill appearances over the decades as their ambassador. 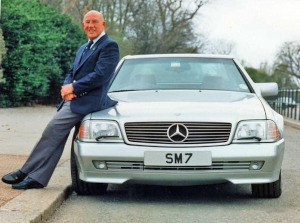 In the 1950s, Daimler-Benz was all-conquering on the race track. It was all the more remarkable considering the state they were in the early 50s. It’s destruction was so complete  that immediately postwar a Daimler-Benz official said “for all intents and purposes, the Company has ceased to exist”.

Immediately after the war, all of their facilities were rubble.

And in 1945-1946, the only way it could show a glimmer of life  was repairing American Army vehicles.

And in the early 50s, about 1951, the Board of Directors decided they wanted to get back into racing. I detailed how another iconic car, the 300SL, came into being.

Anyway from this humble beginning after the War there was a race that will forever be remembered for one of the most amazing finishes.

There used to be a famous race in Italy called the Mille Miglia (thousand miles) that would have contestants drive through a large part of the country on public roads as fast as they could go. With cars getting ever faster, it eventually after 30 years was considered to be too dangerous for the spectators that would line the course, so 1957 was the last race.

In 1955 Moss won very convincingly in his Mercedes-Benz 300SLR. And he did it in a novel way. As I remember the story, his navigator, Denis Jenkinson, an automotive journalist, suggested that they pre-drive the course and he would detail all of the curves on a roll of paper.

Over the 10 hours of driving (of course average speed obviously almost 100 mph!) Moss literally put his life in the hands of “Jenks” as he would be going 170 mph and waiting for him to call out the next curve to brake. Every kilometer driven shaved a second or so.

This preparation gave him a 32 minute victory lead against teammate Juan Fangio in another  300SLR,  and a 45 minute victory over the Ferrari driven by the Italian champion, Umberto Maglioli. The Ferrari, incidentally, had an engine displacement advantage of 700cc.

Monterey Historic Races – 2005. Daimler flew out the 300SLR that won the 1955 Mille Miglia, with Sir Stirling and Jay Leno taking a drive on the track. Cars were numbered by their starting time. Photo by the author.

I used to love going to the Monterey Historic Races. It’s really a festival for car nuts. Over the years in walking around the paddock I’ve seen Carroll Shelby, Jay Leno (he is very approachable), and Stirling Moss. One Sunday, my car club had an event at Lake Tahoe, and the previous day I had driven down to Monterey, enjoyed the events – and drove back that Saturday evening. For me spending $1,000 or so for a motel (supply and demand!) that weekend has always been a bit much. Anyway Sunday afternoon on the way back from Tahoe, I had to pull over and take a nap. I just couldn’t drive that 400 miles in a day and enjoy 8 hours of events. Then drive the 100 miles to Tahoe – enjoy the festivities – and return.

Such is getting older.

But the following story isn’t mine, but that of a friend.

Tony definitely marches to his own drummer.

We had a car rally down beautiful Highway 1 – lunch at Nipentha on a cliff overlooking the Pacific – down the coast with San Simeon and Hearst Castle as the destination.

And I told people that they want to take the evening tour, held only in the fall, because at that time of the year the docents all dress in 30s attire and make you feel that you are a “Hollywood Star” coming off that private railroad car and limo that Mr Hearst always arranged in Glendale. You walk into the massive Assembly Room and see things as they were on a weekend night 90 years ago. People playing cards, having conversations…

Well, I didn’t even know Tony was going – I didn’t see him with us going down the coast. But who should show up at San Simeon but Tony and his girl friend, themselves dressed in 30s attire.

He’d gotten the wrong signal. Although in talking with Tony today he said they could have mixed with the docents and they’d have never known the difference!

They didn’t drive back with us either, although we saw them at a service station 100 miles up the road. Tony marches to his own drummer, whether at San Simeon or talking with Carroll Shelby about Texas fire ants over dinner.

Anyway, he has family down in Monterey and he has always made it a full week of the Pebble Beach Weekend. Of course there’s the world-famous concours, but a dozen other activities through the week. I’ve always just gone to see the Historics.

So who should he run into but Sir Stirling at the Lodge at Pebble Beach.

He apparently met him the same year I shot the above picture.

They were setting up something for a conference and Moss, ever the gentleman,  and Tony apparently had a bit of a pleasant conversation. Whether it was about Texas Fire Ants or not I cannot say, but it is doubtful.

Moss was looking at Tony’s program booklet and said, “I hate it when they misspell my name“.

I’ve been guilty of it too. I blame it in part on over-zealous spell checkers.

RIP, Stirling. Motorsports is a bit poorer without you.

Filed under In Memoriam

Tagged as In Memoriam

One response to “A Couple of Stirling Moss Stories”