2 Dates Etched In My Memory

Are November 22, 1963 and September 11th, 2001. I can tell you exactly where I was on both of those dates and what I was doing. On the morning of September 12th, I was walking my dog as normal and I could sense that something was different. It took me a moment, but I realized it was the sky.

It was the absolute quietness of the sky. Not a plane could be seen or heard. The FAA had grounded all civilian air traffic the day before.

Two years later, I visited Manhattan for the first time in my life. Stayed at a little hotel at midtown run by Catholic nuns.

They all had their stories of where they were that day.

I went down to the financial district and took a picture of the NY Stock Exchange.

A policeman with a submachine gun  told me not to take pictures. I showed him that I had deleted them on my little digital camera.

I went into St Paul’s chapel which had turned into a bit of a museum. It was a haven for rescue workers.

Then I walked to the site of the WTC.

No pictures the news media showed ever really did the devastation justice.

The site was heavily fenced, and even this does not really portray the size of what was the WTC.

Of course, 2 years later all the the wreckage had been cleared. All that was left was a hole. A massive hole. The length and width was hard for me to estimate.

It had to have been 5 stories-10 stories deep. A subway tube that was severed – a subway apparently went into the WTC – looked minuscule –  tractor-trailers looked  – tiny.

I  walked a half block or so to see the firehouse that had the first rescuers on the scene – and had lost so many. I took a picture and a fireman inside just looked at me as if I was violating a consecrated place.

I felt after the picture that I was. 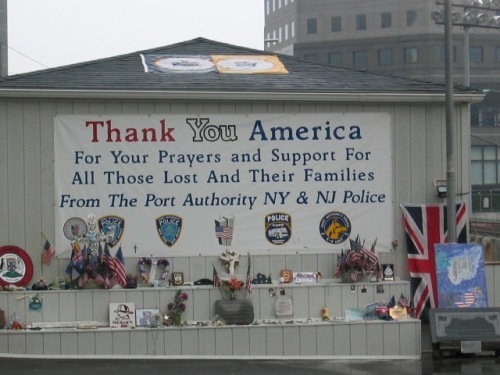 Here’s a few more pictures I took from that day.

A good book of that day details the lives of some who survived, and some who didn’t.

From a different perspective – that of ATC – Air Traffic Control – is Touching History.

Particularity chilling for me was the revelation of a likely 5th hijacking that was averted from the Newark airport – because on the taxiway the pilot had a bad feeling about that smoke from the WTC,  and turned his plane back to the gate.

At that moment, ATC still didn’t know it was terrorism.

Filed under GWOT, In Memoriam

One response to “2 Dates Etched In My Memory”