All That, And They Are Trying To Kill You Too 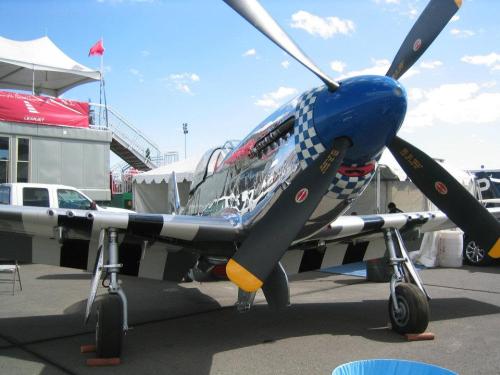 The other day, I wrote a bit about the talk given by WW2 aces Bud Anderson and Dean Laird.

What a day that was. I felt I was a witness to living history. What an honor it was to meet these 2.

And me being me, I had to buy Anderson’s book at the museum store to learn more. Just started it, but I figured any book about flying that has accolades by Ernest Gann, and forwards by Chuck Yeager and Günther Rall, has to be some aviation ride.

I’ve just started it, and Anderson is describing the battle he had as shown from the History Channel.

What I didn’t know was the workload involved in flying that plane while someone’s trying to kill you.

“… A lot of this is just instinct now. Things are happening too fast to think everything out. You steer with your right hand and feet. The right hand also triggers the guns. With your left, you work the throttle, and keep the airplane in trim, which is easier to do then describe.

… With so much power, you are continually making minor adjustments on the controls to keep the Mustang and it’s wing mounted guns pointed straight.

There are three little palm sized wheels you had to keep fiddling with. They trimmed you up for hands level hands off level flight. One was for the little trim tab on the tail’s rudder, the vertical slab that moves the plane left or right. Another adjusted the tab on the tail horizontal elevators that raise or lower the nose and help reduce the force you had to apply for hard turning. The third was for aileron trim, to keep your wings level, although you didn’t have to fuss much with that one. Your left hand was down there a lot if you were changing speeds, as in combat… while at the same time you were making minor adjustments with your feet on the rudder pedals and your hand on the stick. At first it was awkward. But, with experience, it was something you did without thinking, like driving a car and twirling the radio dial.”

Some years ago, I read one of Ernest Gann’s last books, Gentlemen of Adventure. He profiled some people involved in aviation from the early days through the decades.

Of all of the decades, who do you admire most as aviation pioneers?

The WW1 pilots who went up without parachutes and whose life expectancy at their start was measured in weeks? If they survived that, they had a chance.

The mail pilots of the 1920s? Who flew with only a compass  in all kinds of weather? I remember reading about Lindbergh and when the weather was cloudy and with ice, they would resort to a spin to loose altitude fast.

How about the 1930s when aviation engines were really becoming powerful but air frames had a bit to go?

How about the 1940s, when airframe technology caught up with engine technology?

Anderson was also talking about the work in keeping that massive Packard-Merlin V12 tamed in the Mustang.

And planes such as the Mustang, or Lex’s favorite, the Vought F4U Corsair – with a massive Pratt & Whitney 2,800 cubic engine engine of almost 2,400 horsepower – special care of the throttle had to be taken when you were taking off. If you gave these planes too much throttle at take off  because of P-Factor you would lose control on the runway and probably kill yourself.

Happened to a lot of aviation cadets. I didn’t realize how many were killed in training until I read Yeager’s autobiography. A cadet would start training in a Stearman, graduate to a T-6 (Yes, I know the Navy called them the SNJ 😉 ) at 600 hp or so, then after (I assume) some classroom instruction, go to a Mustang or Corsair.

With no instructor, and a figurative pat on the back and a “good luck”.

My hat’s off to those guys. They had to push them through in WW2 and it was sink or swim.

Finally since I was dividing aviation development by decade, how about the test pilots of the 1950s at Edwards or Patuxent?

I never will forget reading Tom Wolfe’s book The Right Stuff, when towards the beginning he was describing a Navy test pilot at Patuxent. He was testing an ejection system and at 8,000 feet or so the chute wasn’t opening as it was supposed to do. He is falling, probably to his death, but still radioing back data to the ground.

All of those people got us where we are today.

As to Bud and his Mustang, I didn’t realize that it was so much work to make such a beautiful and sleek plane look so graceful.

While they are trying to kill you.

6 responses to “All That, And They Are Trying To Kill You Too”