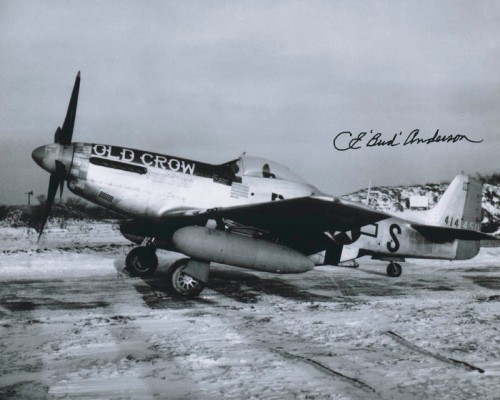 I just had one of the more pleasant and interesting afternoons that I can remember in some time. A few days ago, an ad from the Neptunus Lex Facebook page blipped by – “History Come Alive – a Talk With Bud Anderson and Dean “Diz” Laird at the California Aerospace Museum.

I had to get a ticket.

Anderson, as many know, flew with Chuck Yeager (they are friends to this day) in the famous 357th Fighter Group. He is a triple ace.

Before today, I hadn’t heard of Dean “Diz” Laird. He too is an ace and is the only Navy WW2 ace to have served in both the ETO and the PTO.

Until today, I didn’t even know that the U.S. Navy had an aviation presence in the ETO.

What an enlightening afternoon, hearing 2 WW2 pilots talk about their days.

Laird flew the Grumman Wildcat off the CV-4 Ranger, off the west coast of Norway under a British admiral. They were around the Arctic Circle, and the cold water terrified pilots. He remembered that one of them missed the wire, went over the side, and the British destroyer following them tried to retrieve him. The pilot was too weak to hold on to the rope, so they sent 4 British seamen to get him.

All got aboard, but all later died of hypothermia. He said that you really had about 30 seconds in that water. He told of shooting down a German float plane. He saw the 3 crewmen in the water after it hit – they waved to him and in a low pass he saluted them. He carries to this day the fact that within minutes they were probably dead.

He then went stateside to train in the Grumman Hellcat, and then was sent to the Pacific.

He participated in the Marianas Turkey Shoot, and said some US Navy pilots probably had a too vivid an imagination in kills claimed.

Later, he was among the first Adm Halsey sent over Tokyo. Of 16 carriers off Japan, in one mission Halsey sent about 3/4th of the available air power, 1,500 planes, over Tokyo.

Next up was Bud Anderson. Some things I learned:

In WW2 the AAF (Army Air force) did not use “callsigns” – only the US. Navy. He was “Cement 3-2”. Callsigns for the Air Force came after the War.

The day before D-Day, he was strafing the Pas de Calais under operation Fortitude. This was the allies’ effort to deceive the Germans into thinking that the main invasion force would be at Calais, and not Normandy.

It succeeded. Even after D Day was underway, the Germans kept their heavy armor at Calais, thinking Normandy was a feint.

He said that within a day-2 of D-Day, they sealed the bases. If you found yourself off base, you were locked out, and those on base could not leave. He could see all of the Higgins Boats being readied. At this time for security,  all allied aircraft were painted with the D-Day invasion strips, so the ground forces could differentiate friend from foe.

On D-Day at 0200 or so, his orders, along with 100s of other fighter pilots, was to patrol an area from the beaches to a specified distance inland  to insure the beaches were clear of Luftwaffe.

The Mustang had a 6 hour time aloft, and they were prohibited from using running lights, which made it interesting.  And because there were so many Mustangs each squadron was assigned a “sliver” to patrol. They went back and forth, north and south,  patrolling their area.

He said that other than one flight of 109s that flew over the beach, the sky was clear of Luftwaffe.

Earlier he was talking about the effort to clear the skies before D-Day. I believe that he was talking about the Big Week, when maximum effort was given . The leadership of the 8th AAF was bomber guys, and when the P-51 came with the range that allowed it to accompany the bombers the entire mission, the leadership told the fighter guys that they were to stay close to the bombers, within eyesight. If they pursued enemy fighters above 18,000 feet they were to break it off and return to the bombers.

Then General Doolittle took control of the 8th AAF, he told the fighter squadrons to pursue them until they were destroyed.

And that changed the whole outcome. While the Germans still had an ample supply of fighters, they didn’t have the experienced pilots to fly them.

Before we were done, we were shown this video produced by the History Channel of one of his famous engagements. This was shortly before the end of the war (May, 1945).

There was a Q & A session, and both graciously stayed to answer all questions.

Filed under Heroes Among Us