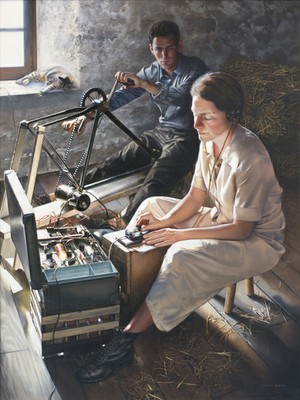 A Painting of Virginia Hall Using Her Suitcase Radio

Imagine that you are a young woman in her 20s or 30s and in Britain. You are either British, French, or, at least in one case, an American.

The Nazis have just finished their invasion of France, and a desperate British government is asking for volunteers for a dangerous mission.

They won’t tell you what it is until they get to know you. You don’t even know what group you are trying to join.

Then you are either out or in.

If you are in – you will discover you are in the SOE –  Special Operations Executive – also known as  “Churchill’s Secret Army” or the “Ministry of Ungentlemanly Warfare”.

You’ll learn how to operate a field radio, and how to jump from a plane.

Then they’ll drop you into occupied France where you are to make contract with the resistance. Your radio will be used both to receive information and disseminate information.

You have to have acute senses and trust your intuition, because one misstep will put you into the hands of the Gestapo and almost certain death. You might be betrayed. And you would have to use discipline to move frequently because the Nazis had ever-present mobile directional equipment to look for your signal.

If caught you were lucky if you’d get the firing squad. If you weren’t, you would be shoved into a crematory oven – alive.

What prompted me to post this was a small article in The Week  magazine on one of these women – Virginia Hall – an American – who, as an SOE member, organized a network of 1,500 resistance fighters who would be crucial to Allied victory.

They were reviewing a book – A Woman of No Importance: The Untold Story of the American Spy who Helped Win World War II by Sonia Purnell.

Now that her story is getting out, Virginia Hall is “bound to be everyone’s new favorite World War II hero”, said A.J, Willingham in CNN.com. A spy like no other, the Baltimore native was a 35-year-old frustrated desk clerk with a wooden leg when she talked her way into an undercover gig in 1941 Vichy France and surprised her British handlers by not just surviving but also organizing a network of 1,500 resistance fighters that would prove crucial to Allied victory.  And that’s only the start…

…”James Bond had nothing on Hall”, said David Holahan in USA Today. Licensed to kill and capable of assuming different identities on the same day, she cultivated sources among madams and prostitutes, found and trained saboteurs, and even organized jail breaks for fellow spies…

Which reminded me of a wonderful British series I saw a few years ago on these women:  – Wish Me Luck.

It is now on Amazon Prime and probably others.

They were unsung heroes, of which the world is only now discovering.

I’m going to watch it again.

Update 04/30/19: I was watching the first episode of Wish Me Luck, and an SOE officer interviewing a prospect said that of all the SOE jobs – being the radio operator was the most dangerous. You had to move every few days to avoid detection and carry the radio, which was tangible evidence of your being a spy and saboteur.

One response to “Some Unsung Heroes”