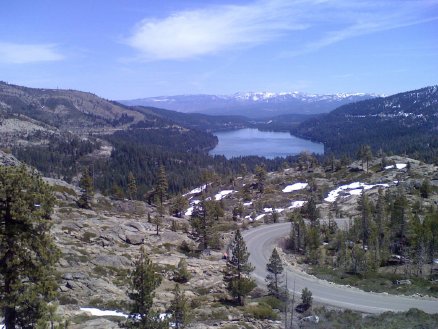 An old section of Hwy 40 from Soda Springs to Truckee – maybe 15-20 miles – was kept open to show drivers this beautiful view of Donner Lake. In 1846 things were a lot more dire.

Some years ago,  I worked for Cessna Aircraft in Wichita KS.

I mention Kansas because when I was there, for some reason, outsiders always confused it with Wichita Falls, TX.

On a lot of levels it was very different from San Diego, where I left after studying computer programming * for almost a year. For one, after coming home to work and ready for a swim on a hot, muggy afternoon, I discovered the pool to be …..empty of water. Because they always drained the pool on September 1st.

But I surprised them too, occasionally. Our first snow, as I remember – was a blizzard. One of those conditions where you can barely see 50 feet ahead of you. A couple of the women were afraid to drive home by themselves, so I offered to take them.

Because that’s what I do.

Anyway, they couldn’t believe how relatively drama-free I traversed through the snow.

And I couldn’t believe how people drove back there under those conditions. Maybe it was an unusual afternoon, but people would tail gate me and pass me up. And I would occasionally pass them up as they became stranded by the roadside.

Driving in the snow isn’t really that difficult.

Small corrections in steering, and easy on the brakes.

Easy on the throttle changes.

There’s no guarantees that you arrive without drama, but you improve the odds considerably.

In the car, one of them was expressing her surprise, thinking all of California was palm trees and surf.

I had to tell her about our Sierras. Although I like a quip a friend of mine made, native San Diegan,  about snow and Californians.

Of course there are some who live in it during the winter.

I used to be an avid skier, until really wrenching my knee, and would make regular pilgrimages “up the hill”. Which made me think of perhaps another story with the theme of over confidence. Suffice it to say, as you are near the summit on I80 you see their mountain. I bounced like a ball on my back a thousand feet down that mountain with the ski bindings not releasing.

Anyway if it is raining down here you can be almost certain it is snowing up there.

And sometimes, that snow can be something. I remember one trip my family took to meet some good friends at a resort at North Lake Tahoe during New Years. It was a 14 hour trip for something that should have been about 2 hours.

If the highway is open at all, chains will be required. And along your way up as you are crawling along (with lot of vibration from the chains) you may see some SUVs stuck on the side of the road. Some people equate 4 wheel drive with sure-footedness on the road surface, and think they are at the Monte Carlo rally. Some of them get a harsh lesson.

Usually the CHP allows 4 wheel drive vehicles through without chains.

You’ll go up and down the hill on 1 of 2 roads – Hwy 50 which takes you through Lake Tahoe (and a spectacular view of the Tahoe basin). Hwy 50 follows the old stage coach road that went to Virginia City, NV. Or use Interstate 80, which follows the route of the original transcontinental railroad. Incidentally when that railroad was built, 2 national groups were noted for the building of so much of it.

The Irish came from East to West with the Union Pacific, and the Chinese came from West (Sacramento) to East with the Central Pacific. They met at Promontory Point, UT but not before some rather heroic carving of the granite building tunnels through the Sierras.

Back to the snow –  in 1952, a Southern Pacific passenger train was stuck for 4 days in that snow.

Then of course, there is the Donner Party. Like most accidents and tragedies, there wasn’t one factor that caused it but a number of them. Lex used to call such occurrences like lining up the holes in Swiss Cheese.

“Most mishaps involve many contributing elements – a chain of events, rather than a single decision. Sometimes you can line up five or six pieces of Swiss cheese and still see daylight on the other end – the holes line up.”

And the Donner Party did a number of wrong things to get to where they did, culminating in an early snow that stranded them through the winter.

A few years ago, some archaeologists in excavating their site, learned a lot of things about that horrible winter.

The little town of Marysville is named for a woman, Mary Murphy Covillaud,  who was a survivor of that party.

Sierra snows are nothing to trifle with.

Update 03/13/19 2319 : My link to what was Coleman College, announcing its closure, should have some background. In 1979-1980 it had a national reputation among the computer industry as being among the top schools for teaching programmers. Teachers were picked from among the most demanding companies, like Ross Perot’s EDS. They had recent and current practical experience, unlike even teachers and professors today. Coleman graduates could get jobs anywhere, except San Diego at the time, which had a glut of programmers. (If I could have, I would have stayed Insane Diego!)

When I attended it, they had their facility in Old Town San Diego. They later moved to an old bowling alley in La Mesa, then, I heard, in Clairemont over the years.

Have a funny story which I may make into a post about my need to have trigonometry and calculus (!??) to get my BSCS degree there. A  friend there who was a Phd dropout from UC Santa Barbara would, for the paltry tuition price of a taco lunch daily down the street, taught me an accelerated way of learning this. “This is the way they teach it“, he’d start the lesson saying, “but this is how you should think of it”…

And I picked it up quickly.

My contention is that math and history are among the most poorly taught subjects in schools. But enough of the update 🙂

During my last visit to San Diego I was dismayed to learn of its closure.

Filed under History, Other Stuff, Travel

One response to “Sierra Snows”