Once as a young lieutenant, I was driving into NAS Lemoore one dark summer’s night for a night FCLP flight when I saw a car coming towards me from the right on an road intersecting with Grangeville. This was a two-lane country road leading to the base’s back gate that the aviators tended to treat like a raceway. There were no stop signs for me on that section of the road, so I had the assured right of way, but the other vehicle kept coming with no apparent diminution of velocity. He had my full attention as I prepared to hit the brakes.

At the very moment when I had decided that the other guy was drunk or crazy and was about to do a panic stop, his headlights suddenly elevated and then vanished above my roof. My initial instinct was that I had somehow lost control of my car and rolled it to the right, although there were no other corroborating sensations in my middle ear. The whole thing took a vertiginous moment to process, but I finally sorted it out: What I had taken for an oncoming car was a very low crop duster working a field at night. As he approached the power lines bordering Grangeville, he pulled up steeply for a chandelle back on a reciprocal course, back to his task. Flying that low – on a dark night – while dusting a field. No radar altimeter, trees and power lines all around. The whole thing had me shaking my head.

This, however, seems to make a bit more sense:**

Lee G. Jackson, design engineer at Air Tractor Inc., says the idea to convert the crop-duster into a light counter-insurgency aircraft stems from a request the Olney, Texas-based company received from the U.S. government in 2002.

“They needed planes with armored engines and cockpits, and with self-sealing fuel tanks for spraying operations in Latin America,” Jackson said.

Risky operations spraying jungle plantations producing a variety of illegal drugs in countries such as Colombia and Peru often entail planes dodging small-arms fire from guerrillas or narco-trafficking gangs. A number of helicopters and fixed-wing aircraft undertaking these dangerous missions have been downed by ground fire.

But the cost of dedicated turboprop-driven counter-insurgency aircraft — such as the Embraer Tucano or the Beechcraft T-6 — has reached a whopping $10 million each, and many smaller air forces have been left struggling to cope with such operations.

Jackson said he expected the price of the armed version of the crop-duster to be less than half that.

An armored cockpit air tractor with a GAU-19 carrying 500 lb bombs having the range to cross the Atlantic?

But where’s the tailhook? 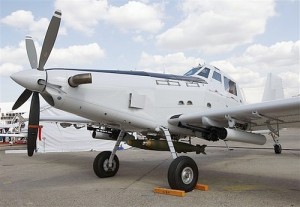