Your humble scribe got a taste of an alternate lifestyle yesterday, inasmuch as he was asked to fly his CEO from sun sparkled Sandy Eggo to sun hammered Inkyokern, California. On account of the business trip to Naval Air Station China Lake that was in it. It being believed that there were better uses of hizzoner’s time than to be stuck in Riverside traffic of a Wednesday.

It’s maybe four hours or so up and the same back again by auto voiture, all for a one hour meeting. Which makes the point I think, and anyway, the freeways are wery hazardous round these parts.

Got to the aerodrome early, for to ensure all things were well, and everything was well and that all manner of things would be well. Was a little concerned that the boss would be stressing over his aviation department’s proficiency in the Beech Duchess, seeing as the entire department had but a mere 1.6 flight hours in make and model, and that gained on Monday afternoon. But as he reminded me, he had once been a P-3 Orion Naval Flight Officer, and thus had long accustomed hisself to the risks involved, flying with neophytes. Truth be told, I was a little concerned myself, but reconciled myself with the knowledge that, should worse come to worst, our jobs would be equally safe.

A friend loaned me a Garmin 396 GPS device, which I’d spent the previous afternoon programming while driving Highway 5. Which in retrospect, was probably the most hazardous part of the whole evolution. It proved useful once airborne, for there is always special use airspace to avoid, which I did more or less successfully.

À propos of nothing at all, the aviators in the crowd are no doubt aware that the FAA has charted NASA to maintain the Aviation Safety Reporting System, whereby the deviant aviator can anonymously self-report his deviation, and thereby shield himself from enforcement action. For the most part.

Because it can be dern useful if you find yourself all mesmerized by flying a new machine, with a new (to you GPS) on a new (to you) route east of the Los Angeles Class B airspace and find yourself blundering in to the R-2513. Is what I’m told.

The GPS made choosing Inyokern rather than NAS China Lake as a landing destination something more straightforward than it otherwise might have been. Spent an hour or so dawdling at the Starbucks in Ridgecrest leeching off the free Wi-Fi until the boss had finished his pitch, and flew home again uneventfully, having leaned the engines on the go due to the 5500 foot density altitude which resulted from a hot day at a relatively high field. The boss fell asleep on the way home at 9500 feet, whether that was due to the lack of scintillating conversation, the drone of the twin pistons or some innate confidence in my airmanship (I was on the autopilot, steering via the heading bug on the compass) is an exercise left to the reader.

It was in truth a little boring, and I have more or less decided that this whole “corporate pilot” gig is fine for ever once in a while, but may not quite be the thing for full-time work.

Unless he buys us a Dassault Falcon 7, in which case I’ll reconsider.

A lovely lady of my online acquaintance provides me books from time to time, with the caveat from your humble that I’ll recommend what I actually like and remain politely silent about what I don’t. With that in mind, I can fully recommend James Huston’s Falcon 7. 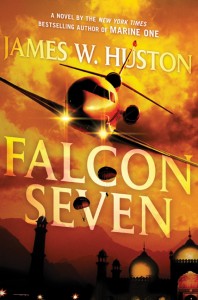 It’s a very well written reader about a pair of young FA-18F jocks who get bagged on the wrong side of the Hindu Kush, and end up hauled before the International Criminal Court at The Hague for hitting a target that ended up being a refugee center – dozens of non-combatants die. They are fortunate to be defended by Jack Caskey, a former Navy SEAL (of course) turned criminal attorney, who immediately smells a rat in the fact that the eponymous Falcon jet has lain waiting on the tarmac at Islamabad in case of just such an event for a mere three days. Huston nearly lost me at the beginning of the book due to a switchology error – he places the weapons release button by the WSO’s knee – but eventually I forgave him for what was after all rather a mundane mistake (so easily remedied!), suspended disbelief and waded right in. I was glad that I did.

There’s not nearly enough air combat, OK-3 wire and getting the girl for some, but Huston’s depiction of the internal conspiracies of Evropean elites reads like a conservative’s nightmare and an internationalist’s wet dream. The book is placed in the here and now, Obama is the president and Eric Holder his attorney general. A bit of disbelief waiving continues to be called for: In response to what is, from the US perspective, an extrajudicial arrest of its servicemembers (the US not being a signatory to the Treaty of Rome), President Obama sorties a carrier strike group to the Northern Atlantic (!).

But the tale is a good one, even if the lads – who remain a shade two dimensional – are on their way to getting railroaded. There  is also the obligatory female liberal lawyer to act as Caskey’s partern and foil, even as he engages in his own internal struggle: He is clearly a patriot, in the best sense of the word. But is he a lawyer, or merely an operator trying to fool himself?

The story line is simultaneously implausible in places and altogether too real. But Huston is an excellent story teller, and has written a real page turner, even if he did fly Tomcats.

Today was the anniversary of the bombing of Hiroshima. Wretchard reminds us that, as World War II Pacific theater holocausts go, it was third rate.

What the global economy needs least, right about now: Another bursting asset bubble, this time in China, of all places.

On the other hand, you have to be amazed at how the world has come in the last few decades, to grok the concept of an “asset bubble” in China.

Brigid of “Mausers and Muffins” fame describes the joy of flight in an open cockpit biplane.

If getting your hair mussed doesn’t quite fit your definition of fun, there’s always the Grumman Ag Cat.

The cockpit is not just enclosed, it’s also pressurized. On account of the pesticides, you know.

I’m Boston bound on Sunday, for to exchange pleasantries with the Unified Cross Domain Management Organization folks. Should be a blast, we can compare notes on our last full spectrum polygraphs, &c.

Have a great weekend, y’all!