Oh, just droning along up there:

The plane, dubbed the Global Hawk, is used for high-altitude reconnaissance missions over Iraq and Afghanistan by the U.S. military. Northrop plans to retrofit the plane so it can carry 1,000 gallons of jet fuel in its fuselage and demonstrate it can autonomously refuel another Global Hawk in midair by next year.

“This technology has the potential to be revolutionary,” said Mark Gamache, director of Northrop’s advanced concepts and technology division. “It will allow our military to do more and longer missions without the worry of human limitations.”

If NGC can pull this off, Mr. Gamache is entirely correct: It’ll be huge.

I can readily envision an unmanned vehicle that serves as a refueling station. All the delivering platform has to do is be stable and predictable, and modern autopilots in clear air masses are quite capable of satisfying those requirements.

But to fly an unmanned aircraft into a receiver position? In a manned aircraft, at least, that requires exquisitely acute fine motor skills, good peripheral vision, multi-spectrum sensory feedback (touch/auditory) and a healthy dose of squeezing the black out of the control stick. While wriggling your toes.

And $33million to pull it off in one year? 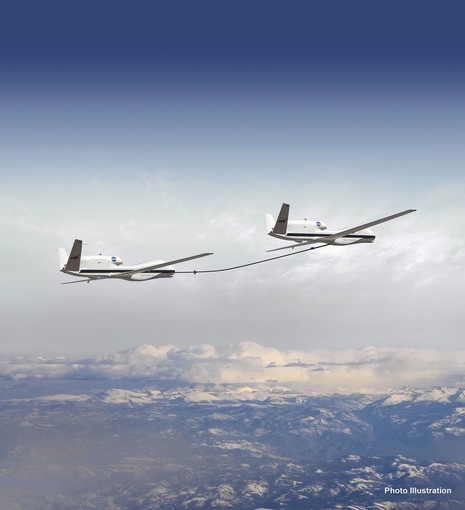 Update: Here’s an interesting twist on the “tanker, posit?” tale –

As reunions go, it only lasted a few minutes.

But Jeff and Christine McLean were thrilled nonetheless to see each other, even though they couldn’t hug, let alone kiss.

Married in May 2009 in Fox Point, the couple has spent most of their first year of marriage apart.

After Christine McLean was deployed from England to southwest Asia in May for refueling missions in the skies over Iraq, Afghanistan and other countries, she hoped she might hook up – literally – with her husband, who has been flying combat and support missions from the USS Eisenhower aircraft carrier since January.

But it wasn’t until last week, on Jeff McLean’s final and 40th flight on this deployment that he rendezvoused with the air refuelers over Pakistan and was happy to see it was his wife’s plane.

That’s the thing about women, they’re givers. They give.