The dawn of a new day

Ensconced ourselves – rather informally, from the standpoint of military regulation – at my working digs, the place being otherwise vacant what with orders keeping all but “critical personnel” at home. Our boss told us the work wasn’t going anywhere, take care of family – good man himself.

The work place seemed as likely as any – I’m pretty much the HMFWIIC of the building I occupy, and we slept unmolested after a brief stop by McP’s in Coronado for comestibles. Your correspondent being more in need of strength than nurture took his refreshment courtesy of the gentlemen from Saint Jame’s Gate (and many thanks to occasional reader Bryan who threw a preemptive fin in the tin, for to help in the paying of it). Didn’t have the heart to bear with sleeping on a gym floor among a cast of thousands, but the office floor wasn’t so very much better – apart from the fact that the gentle exhalations of those sleeping around me were familiar to me. Note to those who follow after: If you’re going to bring the family cat, bring the litter box. Otherwise the little beasts will make do.

Of my people, only one has a house that is directly threatened, but by great good fortune his house was nearly empty of material goods, his retirement being right around the corner. There are at least 500 families * in our community who are not so lucky but, so far at least, everyone people appear to be bearing up with dignity *. Of course, this isn’t over yet, not by a long chalk.

Our house is still in a non-evac area, and frankly we only came down here to placate certain anxieties among the sensitive set and so that I might myself sleep an hour or two, a notion which otherwise might have proven problematical. We’ll be heading home today to take further stock and – having exercised our immediate action procedures – better prepared to face what comes.

We all very much appreciate the kind words, thoughts and prayers.

Update: Got the muster in as the girls headed back up north, and joined them after stopping briefly to take SNO to breakfast. Actually, he treated me. Which was nice. His school has responded to the situation by shutting down classes, and to judge by the collection of empty plastic cups and beer cans on his patio, SNO and his confreres at the NROTC unit have responded by performing some class of community service. Garbage collection, I wot. It looks a bit as though the particulate matter in the air has made their eyes red and faces puffy, the poor dears.

It can be a cruel hard service.

You couldn’t miss the smell of a fire in the air, even in Coronado. Motoring north after breakfast I saw the pall of gray smoke high to the north – it became truly apparent at La Jolla. I’d have taken pictures but I don’t think they’d have the same effect – two-dimensional flat gray on slightly darker gray does not evoke the feeling of seeing your neighbors’ homes fly transubstantiated into very fine ash. The air has a peculiar golden cast to it that would almost be beautiful if you didn’t know what it meant – somewhere not so very far away, an unthinking, primal force is ravaging someone’s home, hope and treasure to ember and dust. I burn to climb into an aircraft and do something. See it. Fight it.

Ash everywhere, on everything. Tickling in the back of your throat. Swirling in strange patterns in the garage. Wonder how it got in there. Lurid images on the television. The local NPR station is off the line – a fire around their transmission tower it seems. The hiss on their radio frequency is faintly chilling. Like a long-accustomed friend with whom one often has friendly disputations has suddenly vanished.

There are 400 houses in our community, and only 10 are still occupied. No guard in the guard shack at the gate, he’s making rounds. We’re told.
Even though we are outside the mandatory evacuation area, many of our neighbors have gone to stay with friends until all of this passes. Workmen drive past in pickup trucks, going nowhere in particular, doing nothing obvious, seemingly surprised to see us. With all of the police, sheriff and fire fighting services drawn to the actual fray this has the effect of making me feel strangely less secure. It seems an absurd precaution, there have been only a handful of looting incidents but the veneer of civilization can be very thin.

But no one loots a burning house, they loot on the margins. Where we are.

Some people do the right thing because it’s the right thing to do. Some because they fear the wrath of God. Others only because they fear getting caught. The Remington 870 comes out of the safe and goes into condition three. It’s only game load but no one else needs to know that, and anyway there is something about hearing a 12 gauge rack that makes everyone think a little harder. Choose more carefully. The plug came out for the first time since I’ve owned it, and I’ve owned it a very long time.

“Can we not put that away someplace?” the Hobbit asked.

“No. Once it has been loaded it must be kept close to hand,” came the reply.

You don’t need it until you do.

I don’t know if we’ll be able to stay here tonight.

It’s not so very far away.

Update 2: The wind velocities are much reduced since yesterday. A good thing.

Update 3: Thanks to those who have asked what material things they can do to help. Our own situation is unchanged. The San Diego Human Society is accepting cash donations to support rescue efforts. Cash donations can be made online at www.sdhumane.org or by calling (619) 299-7012. Locals can contribute toiletries, food and bedding – the Encinitas Community Resource Center at 650 Second St can be contacted at (760) 753-1566. From what I understand the folks down at Qualcomm have everything they need, and they’ve been turning volunteers away. More generally, the San Diego Volunteer Hotline can be contacted at (858) 636-4131 for cash donations or volunteer services. 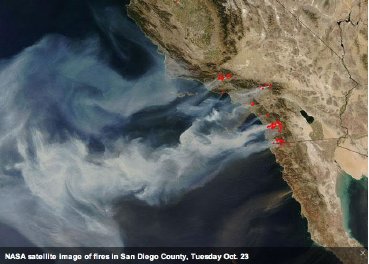 Update 4: The tide may be turning * . The Santa Annas have stayed down and the evac order on both Solana Beach just to the northwest and Chula Vista to our southeast have been lifted. There will be reckoning to be sure – TV reporters were saying that 1000 homes had been lost. My impression though is that the leadership, emergency services and people of San Diego have handled this very, very well. Three hundred thousand people have gone to emergency shelter, and so far the highest demand signal has been for Depends – and who among us has not forgotten those, in a moment of crisis?

Update 5: Finding our way back to form now that the existential is past, your Navy has contributed magnificently to the damage control effort. As have the Guard, reserves and Marine Corps.

Insert something snarky about some politician here. Followed by something depressing about the world in general. Conclude with a brief note of we’re-all-in-this-together optimism.

All will soon be well. For us, anyway. I think.