In comments elsewhere, Op-For’s BullNav points out the intentions of nos amis les Russes to export 250 Su-30 Flankers ** to the regime of Ol’ Beady Eyes. Much may they profit a regime that exports oil but is forced to ration gasoline **, and one that is taking significant heat at home for sending money abroad to support terrorists while neglecting the needs of its own citizenry. Well, apart from hazing folks for their hem length, that is.

Anyone else feeling a chill in the air? If it’s to be another arms race – by proxy * this time – it’s worth a reminder to all that want in that it might be a mistake to bet against the champ.

Anyway, the Flanker’s a good jet, but as Desert Storm MiG-29 killer Sly McGill told my TOPGUN class, a pig wearing a Rolex is still a pig.

Meanwhile the Royal Australian Air Force’s Air Marshall took a little trip out to Kitty Hawk when she was in the ‘hood, for to get a close-look at the SuperHornets Oz has chosen to freshen up the line. 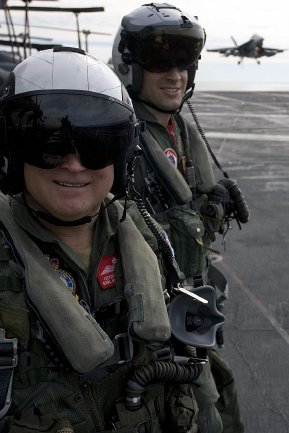 Probably because, deep in their hearts?