An angel winging towards Valhalla

You’ll hear a lot in the next couple of weeks or so about how and why Blue Angel #6 went down yesterday at Beaufort. Most of it will be raw conjecture, not worth the pixels used to frame the text. Somebody has a good idea what happened, but he – or they – won’t be talking to the press. They’ll have an investigation to do, and they’ll do it the right way – out of the glare of the public view – in order to find out how the next mishap might be prevented. A board will be convened, gather evidence, weigh and sift conclusions and publish their results – privately.

Given what has happened, it will almost seem cold, calculating. Impersonal. It’s not – it’s just business. We have a way of grieving, but it has very little to do with the “how” and everything to do with the “who.” It’s pretty private also.

As I mentioned earlier in the week, I don’t know exactly know what form the life hereafter will hold. But I’ve always kind of hoped that heaven would be a place full of 45-minute cycle BFM hops followed by a day trap on a steady deck – MOVLAS – that somehow ends up debriefing at the O’Club during happy hour, before heading home stone sober to the warm embrace of  people who love you.

I didn’t know Kevin Davis, personally, although there’s enough about him in this brief bio  **  that I know him.

A graduate of the Navy’s famed TOPGUN flight school with more than 2,500 hours in a cockpit, Davis – or Kojak, as his fellow pilots called him – was truly the best of the best. In the wake of 9/11, Davis flew combat missions over Afghanistan, often landing on aircraft carriers in the dark of night.

I’ve only ever known a handful TOPGUN grads who were also Blue Angels, there isn’t much overlap in those gene pools. The guys who could play in both sandboxes were really special pilots. So I’m looking forward to meeting LCDR Davis someday in Indian Country, knowing that I need to bring my best game when I check in on freq.

We lost a good one yesterday. 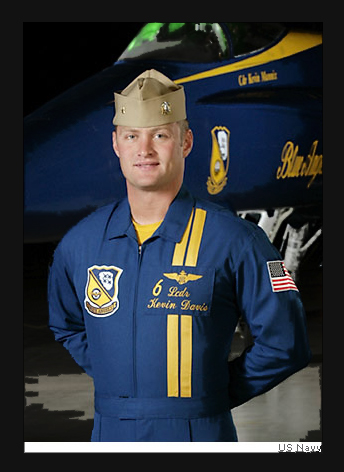 The first round’s on me, bud.