Another guest sea story, this time from Alen, show shares on of his father’s tales. Dad was an RA-5C crewman – an airplane that passed into the fog of history before my time, but of which stories were still told in my youth.

Everything in Aviation has a procedure, Preflight, Departure, Landing, Post-flight, everything is scripted. So when the RA-5C Vigilante with RVAH-9 Hoot Owl markings returned from its assigned mission to the Nimitz that day, the Pilot and NFO commenced their pre-landing checklist as they always did. Fuel state, airspeed, shoulder harness, landing gear, tail-hook, etc… Everything was checked and verified. The ballet was completed perfectly, as befitting the finest trained aviators in the world. A perfect three-wire landing. The engines spooled up to full burner as soon as the wheels touched the deck, just in case all wires were missed. An unnecessary event in this case, as the controlled crash that is a carrier landing brought the aircraft to an abrupt halt. 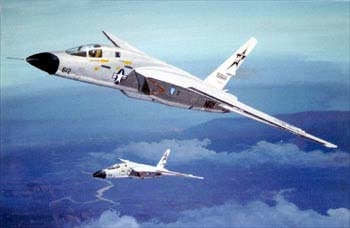 But a problem was nearly immediately evident. The engines, screaming at full afterburner, never started to spool down. The aircraft hung perilously by its tail-hook on an outstretched three wire. This situation is very perilous, the wire had brought to a halt the aircraft, as it was intended to, but without a drop in engine output, the aircraft could not be released from the wire. It also could not get back into the sky if the wire either broke or the hook slipped from the cable. This could easily mean the loss of both the flight crew and the aircraft. Add to this a fouled deck and other aircraft just a few seconds behind in the pattern that still needed to be recovered. This had all the markings of a bad day.

The Air Boss was “urgently suggesting” that the pilot “clear his …. Flight-deck” with great haste. I am sure that the eloquence with which those orders were given were reflecting of the greatest traditions of the Navy and reflected years of college vocabulary that are very much beyond my meager capabilities… Yeah, what he said… As the seconds extended into infinity, and wave off signals were given to the following aircraft. A frantic NFO made repeated calls to an unresponsive pilot while fingering the handles on a yellow and black painted handle that he really never wanted to use. The unrecognizable responses from the

front were muffled and distorted. It was clear that a serious problem had occurred. Then suddenly the muffled voice on the intercom ceased, the engines backed down and the aircraft was allowed to exit the landing area. As the canopy came up and orders came in from the Air Boss for the “Walk of Shame” The NFO noticed that the pilot had forgotten his flight helmet on the dash of the plane.

Apparently, when the Navy suggests you tighten the inertial locks on your shoulder restraints before a carrier landing, there is a reason. As sometimes happens, the pilot had to make some adjustments to various instruments prior to landing but after the aforementioned pre-landing checklist had been completed. As he was unable to make the adjustments while his inertial reels were locked, he naturally unlocked them. The

landing that he so expertly completed only a few moments later was marred by those pesky Laws of motion that kept him moving while the aircraft came to a stop. Catapulted forward and up by his momentum with enough force to wedge his helmet twixt Plexiglas and dashboard with sufficient force that the pilots head was stuck firmly.

Incidentally, the helmet was removed later with a 5 lb. persuade-o-tron, and a little elbow grease.

By now, you’ve no doubt come to expect that every story will remind me of another. So here’s mine, short, but stupid:

We used to have a tactic in fighter aviation called, “extension – pitchback.” Through the merge, we’d blow through to gain separation, and then begin a hard reversal back into the threat, before he’d gotten too small to see. We gained a bag of knots in this maneuver, and pulling back in was always a struggle between swapping ends, and maintaining sight – especially under the g-loading.

It helped to preset your head back over your shoulder prior to beginning the re-engagement. Turning your head under heavy g can cause you to spring the nerve in your neck which gave rise to Spock’s Vulcan death grip. The first time it happens, you will think that you have broken your neck. You want to give up the fight. You want to die.

So pre-setting your head back against the head rest and turning it towards the threat is not a bad idea on an extension fight.

On this particular fight, I’d extended too far away twice, and lost sight of my bandit. The only choice there is to point your nose about where you think he might be, and run through there as fast as you could. That way you’d minimize his “turning room,” lateral spacing he could use to his advantage. Each time, I’d caught a tally-ho just as I blew through the merge, and re-attempted the extension-pitchback fight.

On the third hack, the g was wearing me down physically – I re-engaged, looking over my shoulder, but letting my neck relax a bit. Too much as it turns out, because after I’d started my engagement turn, my helmet got wedged between the ejection seat head box and the canopy. With my head pinned in this position, I could see blue sky straight in the direction my head was stuck, but this was small consolation: My head wasn’t looking the way I was going.

So far as I knew, I was hurtling towards the ground at supersonic speed, or into the ether to stall, depart control and spin. Or, I might have been perfectly OK, but the point was that I just didn’t know.

Which is not the way we are trained to fly.

The moment took less time to live than it does to tell – after two or three futile attempts to pull my helmeted head out of the bind, I radioed a “knock-it-off,” (because I didn’t want to get shot by the bandit, on the way to getting killed), reached up and disconnected my mask and chin strap, so that I could free my head from my helmet. I pulled it clear, and looked a little blankly around the cockpit.

You can feel a little naked flying a fighter with no helmet on, a little “five years old” – no oxygen, no radios. Just you and your naked grape in a cockpit that would hold its breath aghast in shock at the impropriety, if it could.

I righted the jet on a safe heading, and eventually punched my helmet free of the vise. Put it back on. Re-adjusted my mask and chin strap. Re-established comms with the very concerned adversary pilot, and asked him where he was.

He told me, referencing a common geographical point. I turned towards him, got a radar lock and announced with grim satisfaction, “Fight’s on.”

One response to “Procedures”