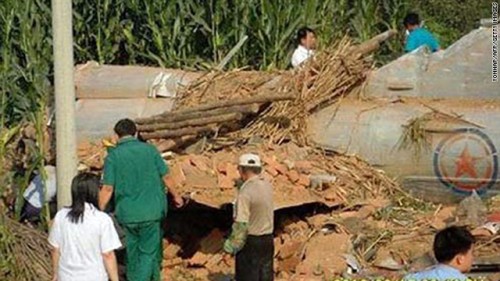 Photographs of the wreckage purportedly taken by an eyewitness have been circulating on Chinese websites, showing the North Korean air force emblem on the fuselage beneath the tail. Military enthusiasts online have identified the aircraft as a Russian-built MiG jet but differed on the specific model, with some calling it a MiG-21 fighter and others claiming it to be a MiG-15 trainer.

Yonhap quoted unnamed sources in South Korea as saying the plane’s pilot may have been trying to defect from North Korea to Russia, losing direction en route and killing himself on impact of the ensuing crash. Chinese commentators have speculated that the plane may have run out of fuel.

Based on the condition of the fuselage, I’d say that’s a pretty safe assumption.

The military enjoys a relatively exalted status in Kim Chong Il’s  gulag state. When even your fighter pilots start bugging out for parts else, you’ve got problems.