Life’s all about the details

I’ve had a few things to post peculating in my head, but OTOH we are at 86% of our allotted space for this particular plan, and Hizzoner gets priority. I’m combing through the Wayback Machine seeing posts we missed from our official archives and I have to say, he left us an embarrassment of riches. He had both a keen sense of humor, and a keen sense for geopolitics.

I have been posting (now, and scheduling) what was at the time current events –   and whether history will prove him  right or wrong his process of getting to where he arrived is worth noting –

One subject that has fascinated me is history – not the way virtually every teacher and professor teaches it – “names and dates” – enough to bore the living daylights out of anyone who doesn’t just worship rote memory – but the forces and personalities behind the events that brought is where we are today.

And most who teach it  bore the daylights out of people.

One of my most memorable professors was Norman Graebner of the University of Virginia – a Professor of diplomatic history.

Now, on the surface you’d think that would be the most boring subject imaginable in a subject boring to being with – the study of treaties.

But Prof. Graebner brought it alive – talking about the economic situation, the political situation, and the personalities involved to the point that by the time the treaty was signed one knew it wasn’t an aberration of the times, but a natural progression.

Things such as Sir Frances Drake being found – and notified – that the Spanish Armada – a fleet King Phillip built with much of his country’s wealth  – was coming to do battle with the British fleet. Between weather and tactics, the face of North America was changed from one possibility to another fact.

WW2 history – the early history before the US entered the war – has fascinated me. I recently reviewed The Darkest Hour – about the time when Britain stood alone after the Nazi conquest of continental Europe. What I did not realize, until the last year or so, is that with the conquest of France, Churchill was under tremendous pressure for 5 days to seek an accommodation with Hitler. How would the face of the world – and the political face – be different today had the British reached an agreement with the Nazis? The movie made some mention of this fact, but in my opinion they brushed over it.

I just saw a fascinating BBC program on Netflix called Edward VIII – the Nazi King. If what they say is true (and they claimed to use recently declassified FBI files) , Edward informed the Nazis that the allies had the plans for the invasion of France (recovered from the crashed plane of a courier), and told the Italians that the Americans decrypted the Italian code. If true, he caused the deaths of thousands of British soldiers as they were fleeing to Dunkirk.

He, and Hitler, had planned on reinstalling him as King once the accommodation had been made with Churchill. And more importantly, if it weren’t for Wallace Simpson, he would have remained king though Britain’s darkest hour.

An even more fascinating “what if” would be if Edward had not abdicated the throne for Wallace Simpson. Could Churchill have withstood the pressure of refusing to make peace with Hitler with the King in Hitler’s camp?

What would the world look like today, with Hitler having conquered Western Europe, and able to bring his full force against the Soviet Union?

Since Edward abdicated over his inability to marry twice-divorced Simpson and remain King, one British historian postulated that Wallace Simpson was responsible for saving Britain.

On the other hand the question might be answered the way an RAF officer was reputed to answer a query of had the Nazis continued their attacks against RAF airfields and ignored London:

“If your aunt had bollocks, she’d be your uncle”.

Lex had a wonderful post on arcs in one’s life and the power of minute circumstances and choices.

One of the best advice of life I ever received was during probably the worst time in my life – when a friend told me that “life is nothing more than choices”. And upon reflection I believe that to be true – we are a summation of simply the choices we have made – good and bad – in life.

For those who believe in a God and an afterlife (I do), I suspect God eventually goes over those choices we made and how they affected us.

Which all of this brings me to the unlikely place of the Hollywood Forever cemetery. 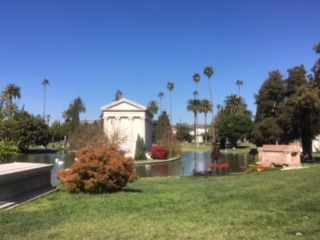 Last week, I did a whirlwind 4 day, 1,500 mile trip around Southern CA. I was going to drive to San Diego the first day. The 500 mile trip (from my house down I5 and I405 to Sea World Drive – exactly 500 miles!) – is a bit taxing but certainly doable – but lately the thought of getting stuck in LA traffic – is a turnoff.

2 years ago when I went to a Lex get together it took me literally 4-5 hours – about 75% the time of the otherwise entire drive – just traversing the LA basin through LA and Orange County.

So – as to driving to San Diego that first day …. meh.

Instead, about 1/2 way down I decided to take Hwy 46 to Hwy 101 and see an old favorite of mine – Hearst Castle in San Simeon. Took Hwy 46, the road Donald Turnupseed (real name!) would have taken had he completed his left turn but for his infamous accident with James Dean. Passed the intersection again and with traffic didn’t want to stop and take a picture of the memorial sign “James Dean Memorial junction” (Didn’t want it to become the “James Dean and Bill Brandt Memorial Junction”)

I love the history of Hearst Castle – but I am on the verge of changing the subject…about how the little details in life can change history and lives. Needless to say, everyone from Winston Churchill to Clark Gable stayed here. G.B. Shaw quipped  that “This is what God would have built if He had the money“.

My mother suggested that I stop at the Hollywood Forever cemetery in Los Angeles to see the grave of my great Grandfather, James Bell. Rumor had it he was interred right next to Rudolph Valentino.

Well, I found the cemetery to be fascinating. So much “Hollywood Royalty” – old and recent – is there. I compared it to Arlington – although Arlington seems a lot more dignified. With both places it seems one could turn everywhere and see someone from the history books. 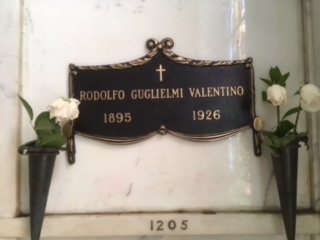 I found Valentino’s crypt – thought it ironic to think when he died millions of women were beside themselves with grief and now there he was – alone. Didn’t see James Bell –  so went to the office and got a location. James is in the same mausoleum but 100′ from Rudolph. 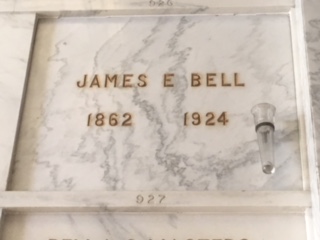 While at the office, I learned that Hearst’s long-time companion, Marion Davis was there so in a bit of serendipity after visiting Hearst Castle, met her there. I could write a small book about her, and how she saved the Hearst Corporation in the late 40s. Her book The Times We Had is a wonderful recollection of her 20 years with Hearst, and the visitors they had. 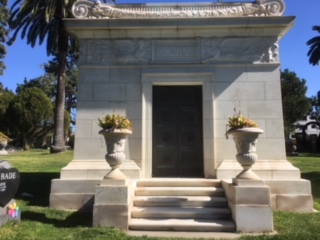 Anyway I suppose what prompted me to write this was the subject of seemingly inconsequential decisions, and how they can be life changing. I learned that Hollywood starlet Lana Clarkson is buried there. I thought the name was familiar, and it turned out she was murdered by legendary record producer Phil Spector. Apparently Phil met Lana at The House of Blues, and Lana agreed to go home with him. 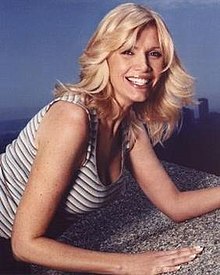 Within an hour she would be dead of a gunshot wound to the head.

2 responses to “Life’s all about the details”