So thanks for all the congrats and best wishes, they are truly appreciated.

It’d been a solid three days of looking mournfully at the weather, forecast and sky – a pilot’s ultimate “weather radar”. Listening into the briefs of the qualified guys to try and get a sense of the missions and mindsets. Listen to them grumble about this or that. Smile secretly to yourself, happy to have changed the environment in which such grumbling can occur.

Study the manual. Sit in the cold cockpit of the aircraft, running your hands over the switches for the pre-start, start, taxi, take-off,  landing, runway clearing and shut-down procedures. Then running over the boldface emergency procedures, just for kicks. Without any simulators for a single seat jet, you take what you can get, and try to visualize success.

It’s a pretty simple airplane really. With just the one engine, the list of procedures should you lose that one engine are blissfully short. Enable the airstart button for emergency electrical power and fuel. Throttle advance a bit, then back to idle. If it hangs up, and you’ve got the altitude, why not throttle off for a bit, then back to idle. After that, you’re looking for a safe place to ditch her. More or less redundant hydraulic and electrical systems. You can always get the rollers down by one method or another, and there are no maneuvering devices or flaps to fret over. The fuel system takes some watching.

The pre-start checklist has been nicely laid out to go from aft left, through center, to aft right. Then battery and inverter switches on, fuel switch on, low pressure pumps on, call for air, start button press, throttle around the horn at 10% and watch the gauges spin up. Air off at 35%, check EGT, RPM, fuel flow and oil pressure within limits. The post-start checklist reverses back the other way.

It’s a tight fit in there with full flight gear, and you’ve got to do a bit of moving parts of yourself out of the way to actuate switches, push in circuit breakers and check various gauges. There are four collared CBs that have to be pushed in just prior to start, and four more to push in immediately afterwards. I still haven’t found a good way to manage checklists, approach plates and charts, without inadvertently actuating the circuit breakers out of sequence; the circuit breaker panel is about the only flat space below the glareshield, and you’d certainly hate for something stowed on the glareshield to get blown down an intake. Once you’re started the dual Garmins make the nav pubs somewhat redundant. Haven’t tried the iPad out yet, am waiting to be a little more comfortable before injecting new complexity into the equation. 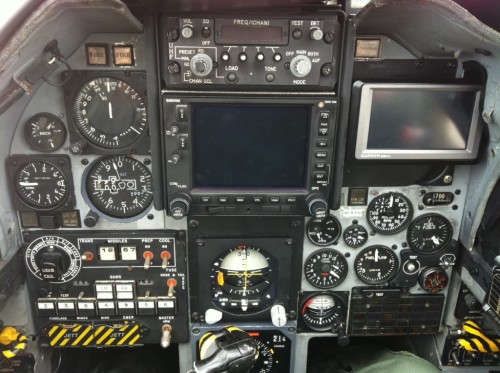 Our chief pilot can go from huffer air on to taxi in two minutes and two seconds (I timed him), but I’m not there right yet. I’m still in the check, double check and triple check mode.

No nosewheel steering, so it’s differential braking to taxi. There’s a mil power run-up once on the runway to check that the T5 reset reduces fuel flow rates and EGT. When you’re really ready, it’s off brakes, throttle mil and – when stabilized – crack the blower open and smoothly advance to max power. The sense of acceleration in full grunt is still exhilarating, but no longer overwhelming. As previously mentioned, it gets up and goes pretty quickly, but it has also got a lot of going to get to before she’s ready to fly. You wait a little impatiently for that last 20 kts, the runway remaining boards flashing by in your peripheral vision.

Two inches back on the stick and hold at ten knots under take-off speed. The nose comes off the tarmac when it’s ready, and – when laden – the beast lumbers more than leaps into the air. Four clicks of nose down trim on landing gear retraction, followed by four or five more when the wheels stow makes up for the increasing airspeed and CG shift. If you wait for the sensation of the stick being out of trim, you’ll be fighting the machine rather than flying it.

Out of blower below 300 kts until you’re sure the gear are up and the doors are closed. She climbs like a rocket in mil power once at 300 kts, so if like me, you’re only climbing to 4000 feet for the radar approach pattern, you ease power pretty far back and try to wrestle her back to 250 kts, maintaining that speed on downwind. Turning to base, you slow to 220 kts, again with constant re-trimming required in at least two axes, pitch and roll. It’s a good idea to remind the controller that you’ll be turning final at 190-200 knots, or else he’ll overshoot you for sure.

They do it anyway, they just can’t get used to us. In the right hand pattern I rolled out left of final approach course each time due to late turns, and nearly every time went from “below glideslope” to “above glideslope going further above” without warning, because they have a hard time grokking an airplane that is approaching at 200 kts. I was backing them up on the Garmins, because the prospect of such control on a dark night in actual instrument conditions and at low fuel is a daunting one. One veteran controller – you could tell by his voice – was actually able to say, “approaching glideslope, begin descent” and we were both of us “on and on” for the rest of the ride. My hat’s off to him.

Once established on final at between 200-180 knots depending upon fuel and store weights, she tracks down the glideslope pretty well at a 1000 feet per minute rate of descent. Both power and pitch are required to make vertical speed corrections, and it’s important to lead the glideslope intercept a bit or you’ll shoot straight through. As always, it’s better to be on the glideslope than off, and if you can’t be on, be high. Unless the weather is right at 200′, in which case if you’re high you might not see the runway.

Taking over visually, you point the nose at the runway threshold until about 100′ above touch down, and then make a fine adjustment to shift your aimpoint maybe 500′ father down the runway. The AOA warning starts beeping at 400 hz when you get to your desired 19 degrees of angle-of-attack, and the rate of the beeping increases as you flare the machine, with a little throttle still on. When you’re just above the runway – maybe a foot or six inches or so – throttle smoothly back to idle and let her touch down. It’s important not to burn up too much runway at 180-170 kts. Three of the least valuable things in aviation being altitude above you, runway behind you, and fuel you’ve dumped. (The fourth is, “girls you used to know.”)

For a touch and go, you go right to mil power and hold the landing attitude, ensuring that the nose doesn’t fall through. When she’s heavy, as on the first approach, she wallows back into the air, and you’re tempted to stroke the blower. It’s important to let her fly, and not try to help her airborne by pulling back on the stick, which would only result in increased drag and pitch porpoising once airborne. Once safely airborne, she quickly accelerates after the wheels come up, and you’re back into the trim and re-trim game.

For the full stop landing, you try to burn as little of the runway as possible while ensuring that you clear the threshold. Hold the landing attitude to aero-brake until its time to deploy the drag chute at 160 kts. You bunt the nose a bit as the chute comes out, and when you feel that reassuring tug, you reset the nose high attitude. Avoid scraping the tail, and lower the nose at 120 kts, or it will lower for you. Cut the chute after having cleared the runway, taxi home, shut her down and they put a patch on your arm. 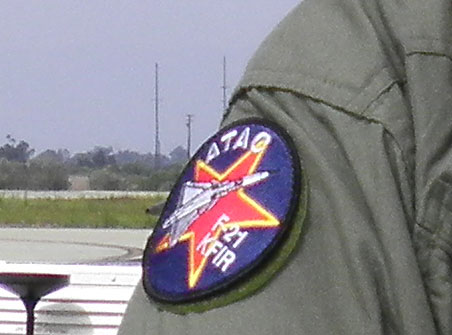 And then you’re a qual.

One response to “Qual Flight”