So, it’s been a busy day today, and so it has. What with yesterday passing in a bit of a blur due to some unwelcome, but not entirely unanticipated news * from Balboa Naval Hospital. A very high success rate, I’m told. In and out on the same day. Never to fret.

Still, even a minor note version of The Big C is an unwelcome signpost on the road of mortality. This won’t get me, probably, but something will. Things tick down, and you’re left to wonder what any of it will mean.

But enough of that, and anyway, tomorrow’s never promised.

Ended up flying the club Cardinal from Montgomery over to Miramar for the air show this weekend. To serve as a static display, like. As though anyone can spare a moment’s attention for a 36 -year old “complex” retractable general aviation single, what with MV-22s, and HALE UAVs and Predators on the line. Not to mention Harriers and Super Hornets. The Snow Birds are down as well from the Great White Up, and what their T-33s CT-114s (Oops) lack in organic performance their pilots more than make up for in tautly choreographed complexity, all ten of them shifting formations and coming at you from every which a way.

The Cardinal has been down for weeks for to replace a blown prop seal. Which is a bad thing, since the constant speed prop is actuated by engine oil. Mine was the first flight since the machine had gone down for maintenance, which resulted in a some ground run-ups, prop cycles, a shut down and re-examination. Since no trace of oil could be found other that where it belonged, I took the runway, climbed to 2000 feet over the field and circled until I was more or less certain that no untoward thing might arise. Loped over to the Torrey Pines Golf Course before turning back towards Miramar. The landing and taxi back to transient parking was unremarkable. The base itself a hive of activity. The Marines do so like a chance to paint and polish.

Also in the general aviation line-up was this rather interesting and experimental 2/3 scale Storch replica. The wide span flaps are raised and lowered by a crank connecting to gear sprockets with a bicycle chain.

A bicycle chain, for heaven’s sake. 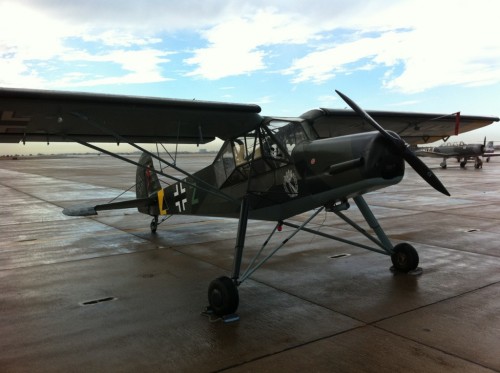 If you want STOL, I bet she’s got it in spades. And I’ve got no issues with the Iron Cross on the fuselage. Could do without the swastika on the tail, though. Historical authenticity or no.

Weird weather today, something hot and moist pushing up from Mexico, bringing with it heat lightning, thunder and soft showers. Which of course made it a perfect day for the Fleet Week golf tournament in Chula Vista. Which, when you’re coming from North County Coastal, might as well be out in Phoenix.

I used to think that a night catapult shot on the carrier was like an IQ test: Turn your lights on and you fail. The same may be said, by extension, to playing golf with thunderstorms clashing and banging in every quadrant. The sensible thing to do would have been to cancel the tournament and pursue such indoor endeavors as beer drinking and lie swapping.

So of course we played, making jokes about only hitting one irons.

Started late, finished in the dark, with 10 under after 12 scrambling holes that somehow never got any better during the last six. Made it home at nearly 8PM,  had dinner with the Hobbit, the other members of the All Girl Spending Team finding other venues more worthy of their temporal investment.

Winding down now with a glass of Cabernet, much to be grateful for. Much to think on.