So, your correspondent got shipped off for to stand behind a marvelous piece of gear that will bring the global information grid to the E-2C Hawkeye. On account of there weren’t any government servants available and a contractor would have to do. In a pinch. Walked into the San Diego Convention Center, saw all the high tech gadgets  on display, saw all the beautiful young things with perfect smiles standing behind them and realized that someone had made a terrible mistake choosing me to represent.

From a purely marketing point of view.

All the time watching the clock. On account of the lesson I had set up down at Brown Field with an eager young man of inordinate height, who once had made his living flying regional jets but who now, on account certain instabilities in the commercial aviation market, teaches elderly retirees accustomed to tricycle landing gear how to fly an Aeronca Champ if only for the drama that’s in it. 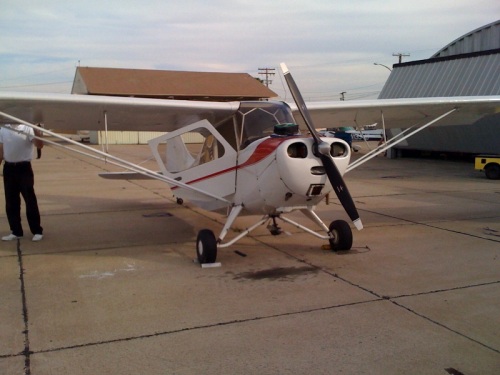 Brown is a bit of a trip back through time. An old military field a mile north of our southern border – I’m assured, it’s hard to tell – it’s a mixture of corrugated aluminum and World War II era wood. Walking up to the FBO, I saw ghosts. Young men grown old in a changed world, a world they do not deign to recognize. Their eyes turn inward to the wooden walls, or upward to the skies. Their ears echo to the sound of booted flight students treading the boards. Nothing else besides remains.

The airplane is a wee, sma’ machine with a 65HP Continental at the front end. No flaps. Hand started. Mags off, three or four cycles of the prop, mags on, breaks on (yer man pulls on the spinner to make sure he’s not being deceived), another crank or two and the lawnmower rumbles to life.

Not exactly AFCEA on the inside, either. 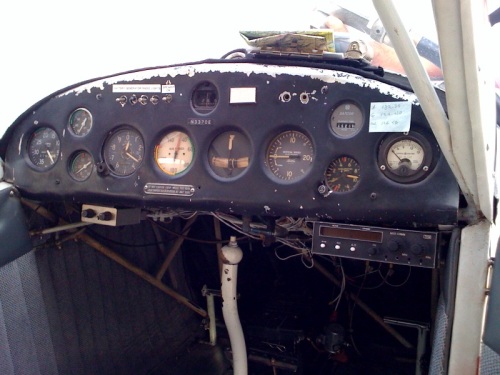 Not exactly a six-pack stack. The RPM gauge runs backwards, like. Which gave us a bit of a start when we throttled back and saw the needle swinging the wrong way. A bit of gentle back and forth on the taxiway. Run-up checks at the hold short. The stick held firmly aft the whole while. Because she wants to get away from you, she wants to dance a merry dance.

The take-off was not so very much. Stick aft until the tail got light, then a bit of a bunt to let it off. A few moments later we were airborne, the (very light) crosswind weathercocking the machine. A climbing right-hand departure to the north, flying towards Jamul. As much right rudder as you’d like, watching a very light westerly breeze push you sideways.

It’s a small machine that manages to feel large on the inside. The coordination ball mostly stays inside the stripes, but finds its way at random intervals out to left or right for no perceptible reason. Turns seemingly in its own length with a little bit of assistance from the rudder. The very idea of an overshooting approach seems fantastic, incomprehensible.

Turns shallow and steep. A power-off stall series that whispered no urgent premonitions, that had no real buffet. We went from level to gently nose down, a bit of wing rock. Is this the stall, I asked.

Back to the field, report the unfamiliar VFR checkpoints, entered base for the first approach. Which wasn’t awful, although I was forced to angle to final. That whole turn radius thing. Came in flat, a little power on. Rounded out to land, felt the instructor following on the flight controls program full aft stick as the wheels touched down. Rolled for a bit before running the engine up again. Airborne.

A slightly steeper approach on the second pass. Sideslipped down to burn the altitude. Flared a bit too soon and ended up settling down in a fairly high rate of descent. Seemed less to flare than merely rotate around it’s lateral axis with the rate of descent pretty much unchanged. Landed moderately hard. Got an injection of humility, not my first.

The third approach was the worst. Set up well, but during the flare the tail hit first and bounced the nose down. Some mad impulse made of 4500 hours of tricycle landing gear made me put the stick forward to match our attitude. Which was precisely the wrong thing to do.

With the CG aft of the main landing gear and the tailwheel off the deck the machine chiefly yearned to swap ends, the gyroscopic effect kicking in. Brisk rudder work to keep her tracking more or less down the centerline. A moment of real concern. Stick aft, stick aft my instructor said. Stick aft.

Airborne again and fully focused. This was new.

The fourth approach and landing was not so bad. The fifth was creditable (although hardly a squeaker).

That’ll come, maybe. I’ll be back.

We parked the machine, and saw another lesson: 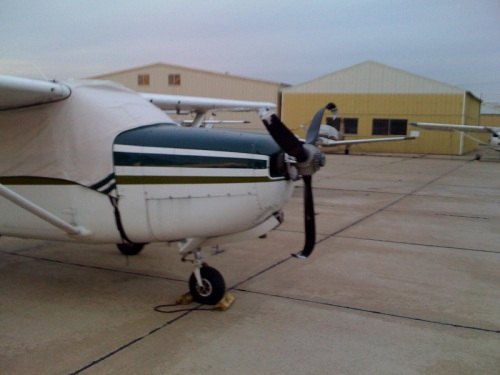 Got to put the rollers down, dad.