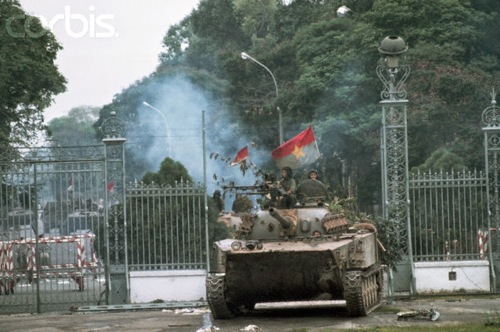 H/T for ORPO1 for reminding me but it was another April in 1975 when the North Vietnamese invaded the South, violating the 1973 Paris Peace Accords of which they were a signatory.

It would certainly take more than 1 blog post to detail what when wrong in South Vietnam, but certainly at the top of it would be the micromanaging of the bombing in the North by Lyndon Johnson, who bragged that “Those boys can’t hit an outhouse without my permission” . That and the fact that there was no military strategy to winning other than “containing communism”.

Thanks to Johnson’s  involvement Navy and Air Force flyers were subjected to the heaviest AA defenses the world had seen – a recent post from Lex detailed a morning briefing.

History has always fascinated me, despite the manner in which is is usually taught, ie, “names and dates”. History is of course the result of human behavior, and sometimes the most profound outcomes occur from seemingly innocuous events.

I came across a British history magazine (unfortunately they aren’t on the Net) that inferred that with Watergate and the forced resignation of Richard Nixon, August 8, 1974, the North Vietnamese were encouraged to invade the South. What held them off before, according to one historian, was Richard Nixon.

It was Nixon who, with Operation Linebacker began a devastating campaign of bombing Hanoi and Haiphong Harbor that “encouraged” the North Vietnamese to come back to the negotiation table. With the mining of Haiphong harbor no more Soviet or Chinese ships could come in for resupply.

Alternative history is of course, futile. But it can be interesting.