A nearly perfect southern California day – blue skies, perfect temps and sea breezes right down the runway. Some low, scattered clouds just to give the blue on top, the blue on bottom, something of a context. 10+ statute miles visibility, the horizon looking like it had been drawn in with an artist’s pencil.

Right there at my personal minimums.

More often than not I end up flying with a recently retired Marine colonel. Thirty years in the Corps, Phantoms and Hornets. Command at several levels. A good fellah and the best thing of all is that, although we’d never met before flying together at Barnstormers, I know him and he knows me. Hand signals and head nods and the very briefest bit of radio comm are all we need.

On our first flight he took a young man – maybe 19 years old – who’s recently joined the company as ground crew. Who asked me before we stepped out to the machines whether the former Marine was an instructor.

Sure, I said. Or at least he had been in the Marine Corps. Everybody teaches, everyone learns. Not sure whether or not he is a certified flight instructor. For FAA purposes. Why?

Oh. I thought he could sign my logbook. I’m going for my private license.

Which combination of language made me to understand that he had not yet started on his private license. Instructors only “sign” a logbook when the student passes a check ride.

The flight went well, my guest pilot flew aggressively – rather more aggressively actually, than the physics of flight would permit from time to time – and kept his breakfast attentive to its duty, and in its proper place. As opposed to running around loose in the cockpit, playing the fool.

When we came back, my buddy pulled me aside privately and said, Don’t trust the new guy farther than you can throw him. I’ve never seen a guy with worse stick and rudder skills.

I’m nearly certain that was his first flight ever, pardner.

Oh, he replied. His brow unfurrowing. That makes sense.

Marines. Bless ‘em, every one.

Our second hack was two young fellows. Game as they come. Who asked at the end of my brief whether or not my buddy and I could have a hack at it ourselves. As pleased to watch as they were to do.

Which, anything to please the customer.

The young men had a ret good time of it, pleased as they could be. Our SNJ came flew by just as we were cleaning up, and hisself came up on freq and asked of us what it was we were a-doing. 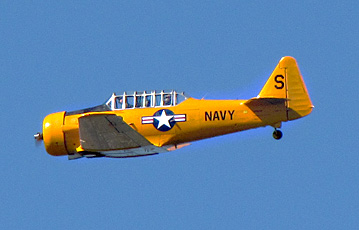 Well then, he said, I’ll take a run at your tail.

Not, thought your correspondent, if we take a run at yours first. Him being but one, and us being two. We made short work: One’s in. Two’s high cover. One’s off. Two’s in. Rinse, repeat.

The SNJ limped away with his tail low, followed by my wingie. Who climbed up alongside my high perch afterwards in very nearly perfect position for a so-called “abeam start.” Most certainly at a significant airspeed disadvantage.

A kind and gentle-hearted man might have given him a few moments to collect his wits and build some airspeed. He might have said something along the lines of, Let me know when you’re ready.

Speed and angels set right, said your humble scribe instead.

Speed and angles left, replied he. Making his bed.

I turned in hard and nose low, easing the throttle a bit to ensure I was on the inside of the turn. Aligned myself nearly underneath his fuselage, with vertical turning room. Had a good bag of knots at the merge. Up and high behind in a right hand, two-circle flow, then cutting back down across the circle. Forgetting momentarily my passenger in the back. Fully in the moment and enjoying the union of man and machine and a worthy opponent. Forty degrees advantage at the second merge, converted into a brief, high angle deflection shot. Trigger down. Snap.

Another high yo-yo, airspeed bleeding down in a climbing right hand turn. Right rudder to keep us aligned. And back around nose low easing off the back stick just before she started to shudder. The light blue of the sky trading frame with the darker blue of the ocean below. A gratifying finish, the old, familiar, savage joy, muted only slightly by the austere kit it was earned in. A Varga turns well compared to another Varga.

Pipper on. Tracking. Knock it off.

Doesn’t have any larger meaning. You can’t draw a conclusion. Sometimes you get the bear. Sometimes the bear gets you. This was my day, and he’ll get his. Both of us happy to still be playing at this level.

Back to the field, an overhead break, a squeeker of a landing. Taxi clear, shut ‘em down, handshakes all around. The 20-something man who’d flown in my trunk passes me a $20 bill as a tip. I almost gave it back, and offered him a tip myself just for the fun I’d had.

But no, I thought. Putting the bill in my shirt pocket with a grateful smile.

Wouldn’t want to hurt his feelings.