Because there wasn’t enough going on in my life, I took the opportunity proffered by a generous benefactor to make contact with a local firm flying Varga Kachina’s (among other things) at Palomar Airport. The company is called “Barnstorming Adventures,” and one of their business lines is demonstrating air combat maneuvering to folks who may or may not be actual pilots. The customer rides in back and the “employee” – strange, thinking of myself in that way – flies up front. A formation take-off and flight to the operating area and some fairly mild maneuvering – the planes are aerobatic, but for insurance and certification purposes, the planes are kept inside aerobatic limits. 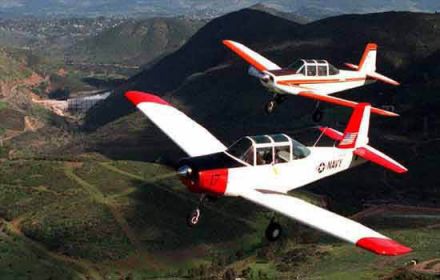 Having made contact with the chief pilot and brushed up on my Biennial Flight Review handbook, I rode up to Palomar last weekend to check the program out. I took the motorcyle up since you’d like to be on time and make a good first impression. You never know what Highway 5 you’re going to face on a Saturday morning – the 8-lane Artery of West Coast Commerce, or the 20-mile parking lot.

Good call, as it turned out: Someone had contrived to test the physics of that whole “irresistable force, immovable object” thing by stuffing their Honda Civic into the median divide. This proved far too entertaining for my fellow road warriors in both directions, several ten thousand of whom decided that it’d be a good idea to slow down and count remaining rivets as they drove by the wreckage. But mein Teutonic krad, she does not give a warm schnitzel for men and their geschtoopid mistakes and so we made ruthlessly efficient time.

As I arrived at the aerodrome a P-51 was landing – nothing like a war bird to give your correspondent a bit of a thrill. It was really neat being around airplanes again. The chief pilot seemed muy sympatico and the machine pretty straightforward. I anticipate that the work itself will be well within my residual capabilities.The chief pilot handed me my aircraft study guide, asked me if I had any problems with the notion of taking drug tests (not so much) and I’ve been happily absorbing V-speeds and operating limits ever since.

After all, there’s nothing much else going on.

Casting my eye around the flight line I also espied a couple Travel-airs and an SNJ keeping company. This keeps up I reckon I’ll be after a tail dragger endorsement before too long.

First orientation flight is on Saturday. It’ll be great to be back in the air again.

The only thing a fully clothed adult can do that’s more fun than flying is having someone else pay for his flight time.

One response to “Hired”