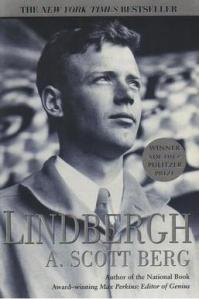 To tell you the truth, when I started this rather lengthy book I was wondering if I would enjoy it. I can remember a wonderful TV Miniseries back in the 1970s, based on James Michener’s Centennial, about a small Colorado town through the last 200 years or so. I enjoyed the series so much I bought Michener’s book and he developed his story a bit earlier, from the dinosaurs if I am not mistaken. Far be it for me to critique an accomplished author like James Michener, but I wanted things to develop on a faster scale. When the subject is a town and the how the people over the centuries made it and changed it, I could see no reason to delve into dinosaurs….but then maybe that is just me. I was wondering if A. Scott Berg’s long biography was going to ramble in a similar manner, but his 640 pages are tight and as you progress you see where everything is related. From his grandfather in Sweden who left under a cloud, to his estranged parents and spending his formative years pretty much alone on a farm, one understands why people considered him to be a bit aloof. He drifted along in life, never really excelling at anything, and even flunked out of the University of Wisconsin. It was right after he left the school that he discovered aviation which sparked his passion.

We tend to think of the “Lone Eagle” in making his trans-Atlantic flight as an isolated and courageous act. Courageous it certainly was, but Berg really gives a feeling for the times, and like all who make history – the kind of history where there is a “before” and an “after”, someone would have made the crossing I am sure within the next few weeks or months. During that time the press was wildly speculating who that individual  would be. Lindbergh himself was certain of this inevitability and his contingency plan was to cross the Pacific in the Spirit of St Louis should someone would have crossed the Atlantic before him.

Anyway, in keeping with the title I found it interesting that he came to San Diego as his backup plan. He was an airmail pilot – itself a pioneering industry that gave birth to our airlines, and the Ryan Aircraft Company in San Diego had a good reputation building planes for airmail companies in the Pacific. Had a businessman been of a different mind, the world might have remembered Lindbergh and his Bellanca airplane from the Columbia Aircraft Corporation. Lindbergh, assuming a deal was made, put a $15,000 check on the desk of Charles Levine of Columbia Aircraft in New York. “We will sell our plane”, Levine said, “but of course we reserve the right to select the crew that flies it“. This of course stunned Lindbergh, and he left the office in a daze. That’s when he decided to talk with Ryan in San Diego. Those of you living ,in the words of this site’s namesake, Sandy Eggo, visit the venerable US Grant Hotel and see room 447. That’s where Lindbergh stayed for the first few days for $2.50/night, before moving to more economical digs at the YMCA. The plane wasn’t an off-the-shelf model but was custom made to his  specifications. As one example, during his San Diego stay, they lengthened the wingspan by 10 feet.

Since he valued range more than visibility, he wanted another gas tank in front of him and behind the engine. Thus he couldn’t see  in front of him! I suppose to land he would have stuck his head out the window and side-slipped to the runway ?

His design criteria, according to the author, was “first consider efficiency in flight, second to protection in a crack up, and third, to pilot comfort” Since the extra gas tank blocked any forward vision, a former submariner at Ryan suggested a periscope, which was incorporated.

I have always enjoyed speculating with alternative history – if Lindbergh had the Bellanca would he have still successfully crossed? If someone had successfully crossed the Atlantic just days or weeks before, would we remember “Lucky Lindy” as a Pacific pioneer? Or would he have been another one of those brave aviators who tried never to be seen again? Lindbergh himself was practical on this matter, taking just enough sandwiches for his calculated elapsed time.

Alternative history can be fun but of course pointless. Berg did a wonderful job and this is probably the definitive book on Charles Lindbergh.

UPDATE: This website has a wonderful archive of rarely-seen videos and stills of Lindbergh’s preparation and aftermath. There are 4 parts.