Earlier, I had mentioned that at The Farm, there were all kinds of characters, 2 legged and 4 legged.

Mr. Tipp was among the latter. My uncle usually addressed the dogs and cats at the farm by the title “Mr.” or “Miss”.

A lot of the dogs and cats that came to the farm were what my aunt called “walk-ons” – thoughtless people who decided they no longer wanted their pets, and dumped them to fend for themselves.

Mr. Tipp was no walk-on, however. My uncle got him from his tractor-trailer driver Homer. Homer would deliver the heavy equipment to the construction sites, whether it was a Caterpillar bulldozer or supplies in an enclosed trailer.

Homer had told Willis that he had some pure-bred Boxer puppies, and he could have one if he desired. Since the position of “watchdog” was open, my uncle accepted.

However, when Mr. Tipp arrived it was obvious that he wasn’t a pure-bred Boxer. In fact, we never knew his background. The consensus was that he was part Boxer, part Rottweiler, and parts unknown.

It became a running joke between Willis and Homer over the years. That was the strangest boxer anyone had ever seen, anywhere.

The position of watchdog was filled, however.

In fact, if there is a canine Watchdog Hall of Fame Museum somewhere, Tipp’s name has to be among those honored. It remained filled for the next 12 years or so. In fact, Tipp became a legend in Wayne County.

For some years after his death, people would come to the farm and ask “if that watchdog was around”.

That dog was fearless.

He was 100 lbs of solid muscle with a deep, menacing growl and bark if he felt it necessary. He could be so menacing that Willis had to put a muzzle on him in the last few years of his life. To others he could be as polite and quiet as could be.

All this being said, he was not vicious. To my knowledge, he never actually attacked or bit anyone. His presence was such – when on “high alert” – that if he were barking and growling at someone – they would stay in the car until someone from the office came out.

Perhaps a better description of him would be “canine sentry”.

If he knew you – you were free to pass. Not only free to pass, but encouraged to scratch his back.

As he aged, his appearance became even more fearsome. He was down at the shop one day watching Leonard do some welding on a piece of equipment. He apparently watched too long, because he went blind shortly thereafter. The vet removed one eye, and sewed the socket shut.

His other eye became a bluish color.

His hulking fearsome appearance got even more fearsome.

He never let this impediment hinder him, though. He knew his way around The Farm like the back of his, er, paw. He still loved to engage in his second-favorite activity, which was chasing the backs of the horses when we’d ride them. One of the horses, Sandy, was a beautiful old Tennessee Walker. He would try to kick Mr. Tipp as he ran, barked and made half-hearted attempts to nip at his rear legs.

Once he went blind however, Sandy seemed to know this and no longer tried to kick him. He’d still try to nip at his legs, but the horse would not kick. For all of Man’s pride and thinking he knows the world and that which is in it, someone please explain how this horse knew that the dog was blind.

I mentioned that Tipp’s second favorite activity was chasing the horses. (Actually scaring the daylights out of visitors he felt deserving may have been on his list of favorite activities, but for the purposes of this post we’ll ignore that).

And Tipp’s favorite activity? It was undoubtedly riding in the jeep. Whenever that jeep was running, as soon as he heard it he’d come running. Whoever was driving it would stop and let him hop in the back. 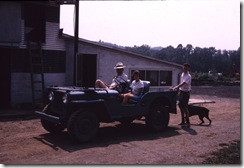 The dog sat in the back of the jeep, head out in the wind, and enjoyed the ride for as long as it went, whether 20 minutes or 2 hours. When the engine shut off, one could almost sense reluctance in the dog to leave.

My uncle had let me use the jeep for as long as I wanted, and when I was close to running out of fuel, there was even a fuel pump for my use.

And as usual, if the dog didn’t see me when I started the jeep, within 5 minutes he’d come running and I’d let him on.

One day as I was driving and I found myself going about 30 mph straight for the end of the loading ramp.

I guess speaking of this passively in the third person illustrates the problem.

This was not a ramp for, say, gooseneck trailers – low trailers, but enclosed trailers where the floor of the trailer is about 5’ off the ground. In other words it was a 5’ drop from the end of the ramp.

I was about 15’ to the end of the ramp going 30 mph. I knew to keep the wheels straight and like the Dukes of Hazzard, just went airborne for a couple of seconds. I can remember 50 years later the strong jolt when the jeep hit terra firma, bouncing off the ground a couple of times. I guess if I were a young Hollywood “stuntman” I could have gotten some serious spending money (for a 12 year old) for this stunt.

I was so focused (better late than never?) during the interval I didn’t know how my passenger was faring. I can’t even remember whether he stayed on the jeep or went airborne too.

But from that day on while he still loved to ride in the jeep, he refused to ride in it while I was driving. It got to be such that when I was riding as a passenger changing seats to drive, the dog would look at me –then jump out of the jeep.

He might have been blind in later years, but he still knew I was driving. 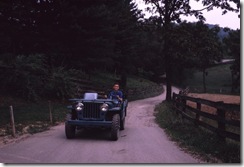 He did this every time, without hesitation, for the rest of his life.

And if I gave up the driver’s seat to someone else, Tipp was right back there.

You can imagine the laughter that this evoked, all at my expense.

And, at least to Mr. Tipp, it was well deserved.

He was afraid of nothing – except my driving.