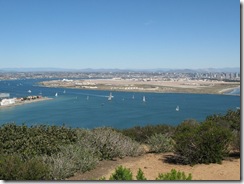 I had originally planned on making the title “Older Bill Gets reacquainted With Younger Bill”  – but besides telling you about a bit of the San Diego I knew in 1979-1980 – there are some pictures that I’d like you to see that show you why San Diego is so beautiful.

And I am aware of the space limitations I am coming against – we are about 3/4 the allowance – and….well, still haven’t found the perfect solution. I don’t want you to have to log in somewhere to see the pictures…

Maybe I’ll have to look through some of my older posts that have had hardly any views and delete them.

Buck, I am trying – the pictures are a bit bigger this time.

Sometimes it’s fun visiting a part of your life that is long gone. Sometimes it is cathartic, sometimes just to satisfy some curiosity as to how you lived so long ago.

There is a point in the timeline where the place you visit involves another person you vaguely knew.

I first experienced this 21 years ago, when I went back to my old barracks (or tried to) at Landstuhl, Germany.

The old Luftwaffe WW2 era stone barracks that I called “home” (the foundation had crumbled, the entire building was at a slight “list” – and to top it off the Air Force didn’t want any part of it) was long gone.

The old stucco hospital built in the early 50s was  replaced by a modern multi-story hospital.

“You Can’t Go Home Again” – a famous saying attributed to Thomas Wolfe – is quite true. If you try to relive things you will inevitably be  disappointed.

But it can be fun to visit what was once your home. And at the same time, get reacquainted with the person who called it home.

I’ve always had an affinity for San Diego. Maybe it is from the time when, as a 10 year old boy, we visited some friends in La Jolla, just to the north.

Starting in the mid 1970s, I used to do a lot of road trips building up a business my father & I started. Lots of cold calls, the toughest kind of selling. But before I start to go off on that tangent, suffice it to stay, I stopped in San Diego quite a bit.

And my favorite place to stay was a small family-run motel right across the street from the beach, in the suburb of Ocean Beach.

A few years later, I decided to attend a computer trade school there called Coleman College.  I guess they call themselves Coleman University now – but all they did – and do – is teach computer programming.  And they did it very well, with everything from a mainframe computer at the time, an IBM 370, to PCs. I’m sure that has changed now – but without going into yet another tangent, I lived in San Diego for a couple of years – first right by Balboa Park on Upas Street, then out in El Cajon about 15 miles east.

I’d still be there if I could have found work. Went on to Cessna Aircraft in Wichita, but that is another story.

The motel that I knew so well 35 years ago – remodeled and more expensive. But it has a great view – and I found a “new favorite”… 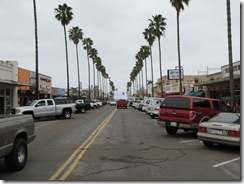 The Ocean Beach pier, of course, hadn’t changed. It’s one of the largest on the west coast, I believe.

I actually had to use my GPS to find my apt on Upas St – that is it off to the left. Think I was paying about $400/month, now it is over $1200. It is right on the edge of  Balboa Park, and at night you could hear the animals of the San Diego Zoo.

The San Diego Aerospace Museum, at Balboa Park is still there but I think they moved their facilities. They are much larger. They had had a fire in the 1970s that destroyed most of their collection. I’ll have a separate post on this in the future. 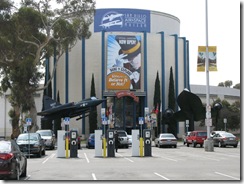 Broadway had really changed. 35 years ago, I described it to my now late uncle, a Marine veteran from the Pacific. The way I described it, he said that it hadn’t changed since 1942. Still had seedy bars and tattoo parlors – all gone now. Broadway runs to the Broadway Pier, where the Navy used to have a ship for the public viewing every Sunday.

By the way, you see the “Tijuana Trolley” in the background. That is new, too. 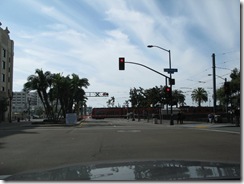 The Midway is of course new – right south of the Broadway Pier. Unfortunately didn’t have time to tour it. But she looks impressive. 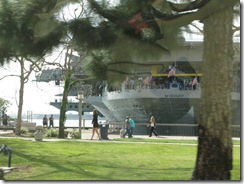 Harbor Drive, a beautiful esplanade that runs along the waterfront in downtown San Diego, hadn’t changed. And you can see the masts of the clipper ship Star of India which has been there “forever”. 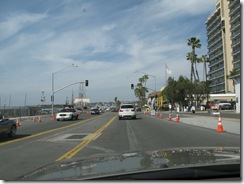 This is on the Pacific Highway, just east of Harbor drive. I think they used to build B-24s in this huge complex during WW2. Later it was owned by Convair and the sign on it now stated ‘Space and Naval Warfare Systems Command”.

I drove the 15 or so miles east on I8 trying to find my 2nd apt in El Cajon – but couldn’t remember anything. Believe it or not the air temperature can vary 20 degrees just between the 2 cities.  A part of my past irretrievably lost? 😉

I had to drive to the Cabrillo Monument at the tip of Pt Loma. I couldn’t have picked a more beautiful day. CAVU, as the pilots say…

You can see North Island NAS right across the bay

You can see some of the Ft Rosecrans military cemetery here.  I have been to 4 military cemeteries, and been moved by all of them. Years ago I went to the Luxembourg Cemetery, and to see thousands of white crosses on the lush grass, realizing that most of these were soldiers killed in the Ardennes Offensive (Battle of the Bulge) –  it was moving.

I’ve been to Arlington, where almost everywhere you turn is someone from history, who died in the service of our country.

But Ft Rosecrans has to be the most beautiful setting. I will have a post on it in the future. This is where Lex resides.

…back on Harbor Drive, Anthony’s seafood restaurant hadn’t changed. But a manager told me that it will be remodeled next year. Great seafood, and they have both a formal restaurant and an informal snack area. 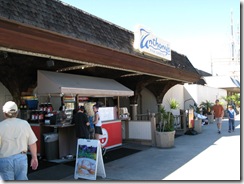 It reminds me of Ivars in Seattle, also great. 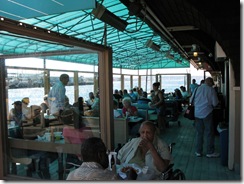 Had to just savor the moment here…

Have to tell you about my good friend Dan. A native San Diegan, we met at Coleman College. To get a degree in computer science, I had to know trigonometry and calculus.

Why, I have no idea but Dan, who was in the Phd program at UC Santa Barbara, offered to tutor me for the fee of…..get this – a taco lunch every day at this Mexican restaurant in Old San Diego. It was just down the street from the school, and after lunch I’d get a half hour or so of lessons in an empty classroom.

“OK Bill, here’s the way they all teach this but this is the way you should really think about it”.

Dan’s method had me solving complex problems in weeks.

I hadn’t seen him in 25 years, and we caught up on things at Ricky’s Restaurant, on Hotel Circle. Ricky’s was the same but alas, the owner told us they were closing soon. I bought one of their mugs for the closeout price of $2. 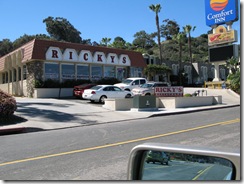 You can’t go back home, but it is nice to visit.

Oh – and my new favorite place to stay in Sandy Eggo?

The Dolphin Motel. Run by the same family for 60 years, it is right across the street from the harbor at Pt Loma.

Just off Rosecrans. Free breakfast of rolls, juice, coffee and yoghurt, I talked with people from all over Europe and Canada. Rooms were simple but squeaky-clean and $50-$60/night for a single.

Next time, I’ll show you Studio City, a place I knew 55 years ago.

We are on our way! 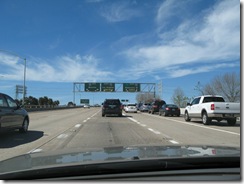 6 responses to “Images Of Sandy Eggo”