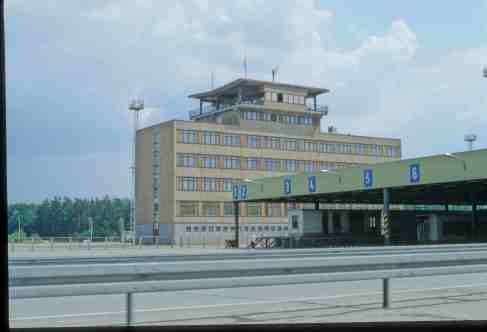 I’ve been reading 2 books last few days – one – is fascinating but so full of detail as to make (at least for me) an arduous read. The other, I started and I am flying through it.

Adventures in Stasiland, by Anna Funder was a recommendation of David Foster of Chicagoboyz.net.

Funder, an Australian, was working in Berlin and wanted to interview people in the former East Germany, both ordinary citizens and those responsible for keeping the regime intact.

It’s quite a read. I was drawn to the following picture because one of her interviewees, a former Stasi (Ministry for State Security) described a border check station similar to this as I left Hamburg on the Autobahn. At the time I thought the building a bit bizarre – so huge for a border check station, now (in 1992) full of broken windows and abandoned.

But its function was sinister – to prevent people from escaping from East Germany to the West. The former Stasi Man described having cars with cameras in the headlights, dressed well as a Western businessman, Stasi Men disguised as service station attendants, all to help find people hidden in cars.

The Stasi had the power of life and death over its citizens – she interviewed one woman, Julia, whose fiance just disappeared after being arrested.

This was the same trip as my earlier photo montage to Dresden.

I was struck, in reading the book, of a regime that was one of the most repressive in the Eastern Block and it disappeared almost overnight in a bloodless revolution. The thought of traveling there was left to all but the hardiest and most adventuresome.

I had a job with a boss whose family was from Berlin, and he told me that if I wanted to see what the East Berlin looked like, I’d better get over there because it would soon be gone.

When I think of East and West Berlin, I think of the Wall. In the book, one of Funder’s subjects, Julia, had a boyfriend at 16 she met at the Leipzig Fair – this was a business fair open once a year to the west, and the boyfriend was Italian. For this her mail was intercepted – she could not get a job anywhere and in trying to escape, was caught and sentenced to a prison term.

This is a memorial made by West Berlin’s citizens to those who tried to escape over the years and were shot. The first memorial “Unbekannte Kind” – an unknown child – 12 years old. He was killed May, 1969.

If they could get over the Wall, past the barbed wire, dogs and guards most (or all) had to swim across the Spey River.

You can see what was East Berlin across the river – dull and brown.

This is the old Stasi headquarters, the last place you’d want to be. They had the power of life, death, or imprisonment over you. One of the things that stuck me in Funder’s book was the number of Stasi or informers over East German citizens. In the old Soviet Union it was – I think – 1:2000 and in East Germany 1:60. When the Wall first came down it was a scandal for citizens to find out, through the files, that friends or neighbors of many years had been informing on them.

Julia was still trying to find out what happened to her boyfriend. When the Wall first came down the Stasi were using shredders so much they were burning them up – and the records of some will never be known. Julia has never found out but it is thought the Stasi killed him while in detention.

All what was East Berlin… 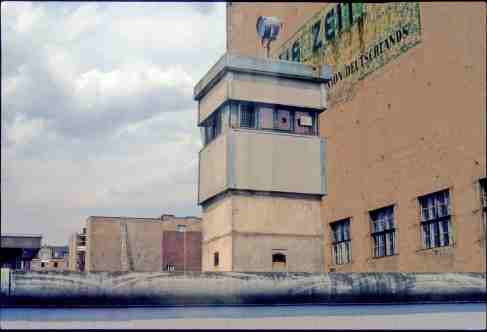 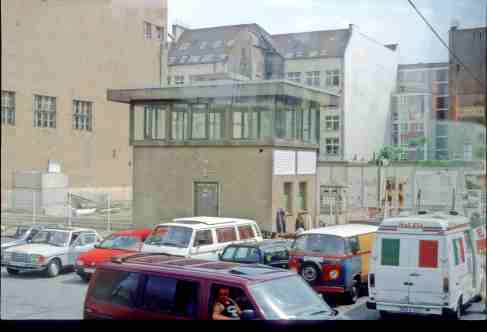 This is an East German Trabant, or “Trabbi” People would wait 10 years to get one – made out of plastic with a smokey 2 stroke engine. I can remember leaving Dresden on the Autobahn – the Autobahns in the East looked like perfectly preserved 1939 Autobahns – I am cruising 100 mph in my little Opel – Mercedes & BMWs are flying past me like I’m standing still (you do learn lane discipline over there!) – and a LOL (that’s Little Old Lady) in a Trabbi is sputtering & smoking on the on-ramp. I made room but thought “You’re on your own…. 😉 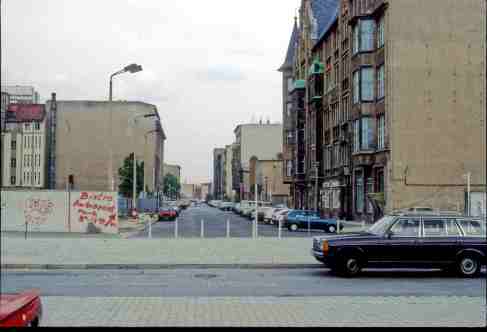 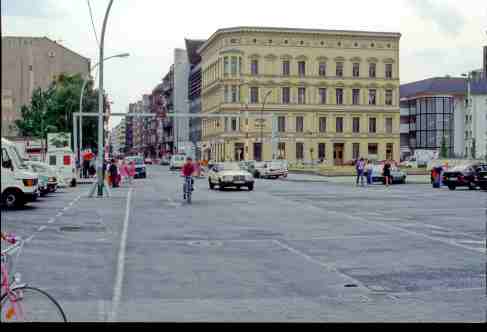 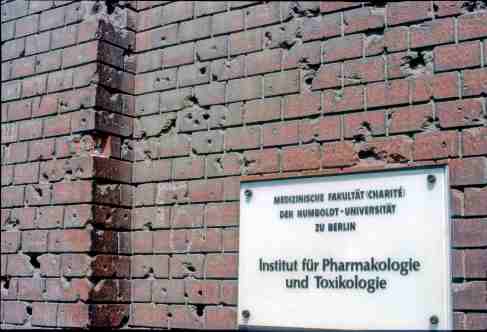 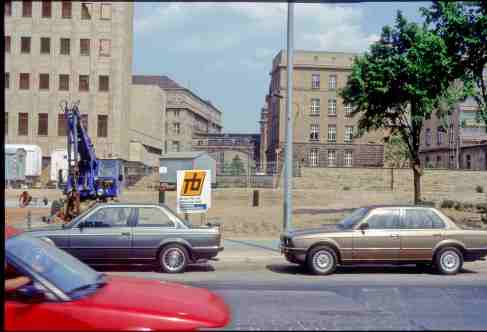 While my German is not fluent I think this says that shortly before the end of WW2 2 young German soldiers were hanged here by the SS. (at the Friedrichstrasse S-Bahn)

Street names of Communist heroes were being changed….(hence the red line) 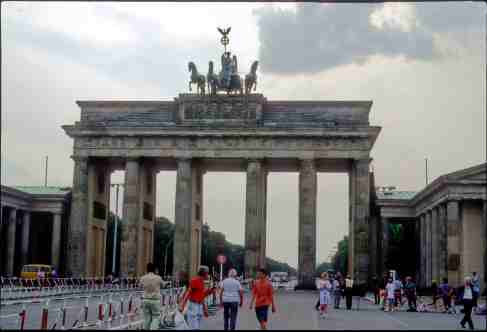 Brandenburg Gate – it was here that Ronald Reagan, against the advice of the state dept , gave his “tear down this wall” speech….

Unter den Linden  (under the Linden (trees) ) – before WW2 this was embassy row. Like everything else in the East  it looked shabby in 1992. 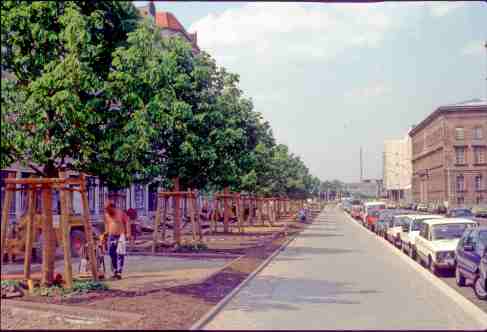 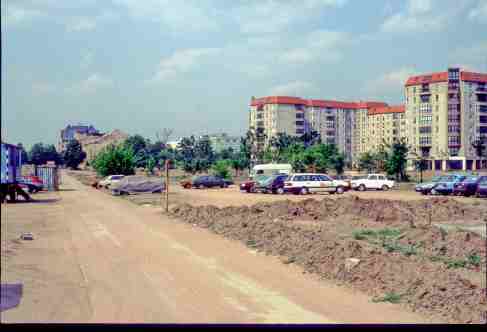 Potsdamer Platz ( Potsdam Square) – I think this was a death strip area before the Wall came down. It is famous for another reason…

I asked a local “Where is the Hitler Bunker?” He replied “You’re standing on top of it”

Sure enough, there was an old air vent close by. According to Funder (who was there after 1992) they dug it up shortly after here (with the construction, couldn’t decide whether to destroy it or leave it as a monument to evil – so they decided to bury it again and decide in 50 years.

…On the west side  – I probably don’t have to tell you which is which – but today it is probably more blurred. After billions of Euros were spent… 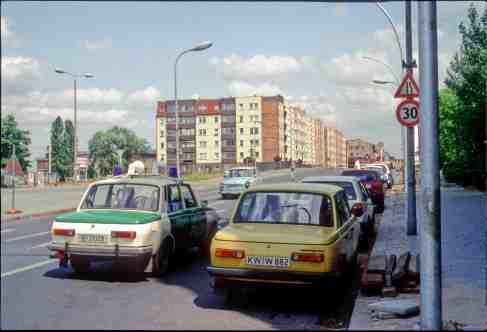 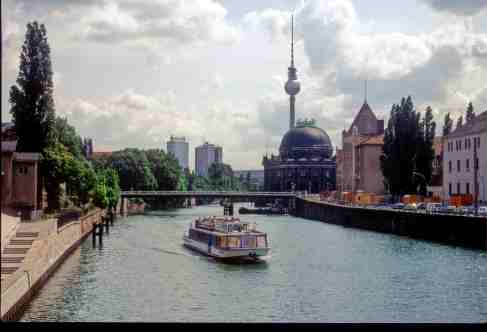 Berlin is known for their Beliner Weisse – a wheat beer – with syrup. That, and outdoor cafes that are busy even at 3 in the morning! 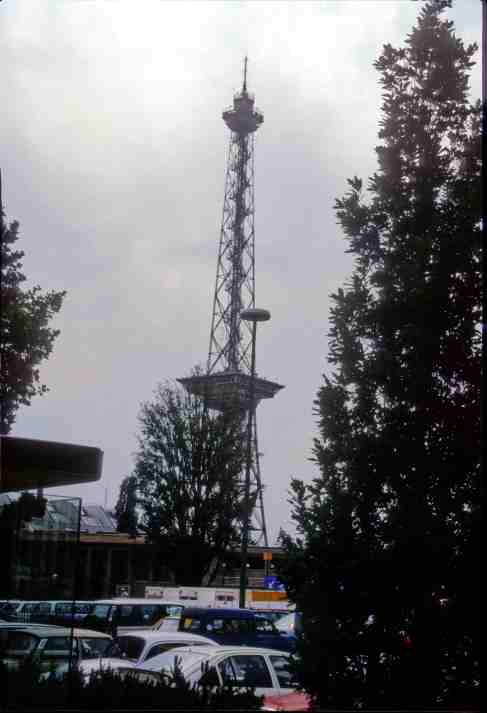 This is Berlin’s old radio tower – a city landmark. 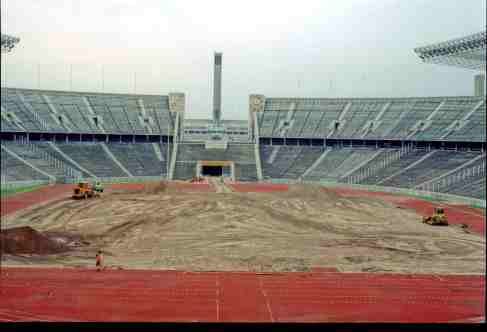 Berlin’s Olympic stadium – this was almost alone in escaping damage from WW2 because it was intended to house German POWs after the war. It was an eerie feeling walking through here – seeing remnants of the Nazi past – including garish human cement figures in front idealizing the Nazi version of the “perfect man”. 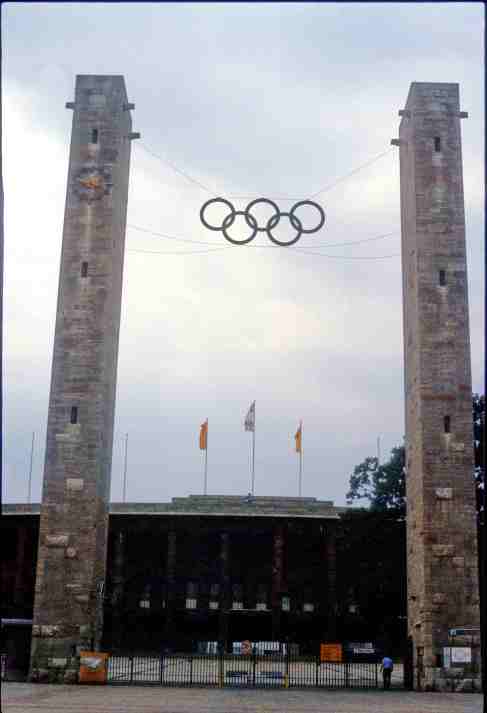 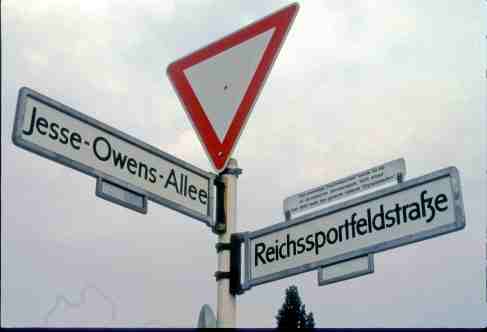 …My Hotel – a family-run “Pension” was on the 3rd floor – price – about $50/night with breakfast – just 3 blocks off the Kurfurstendamm – Berlin’s 5th Avenue.

Maybe you could compare it to London’s Harrods – but every floor is devoted to something – an amazing store. Just a few blocks from my Pension …

The Kurfurstendamm – or “Kudamm” is like Manhattan’s 5th Avenue – every store and hotel was out of my price range 😉 – but my hotel was just 3 blocks off…This goes for miles and I walked many miles along here and never got bored. 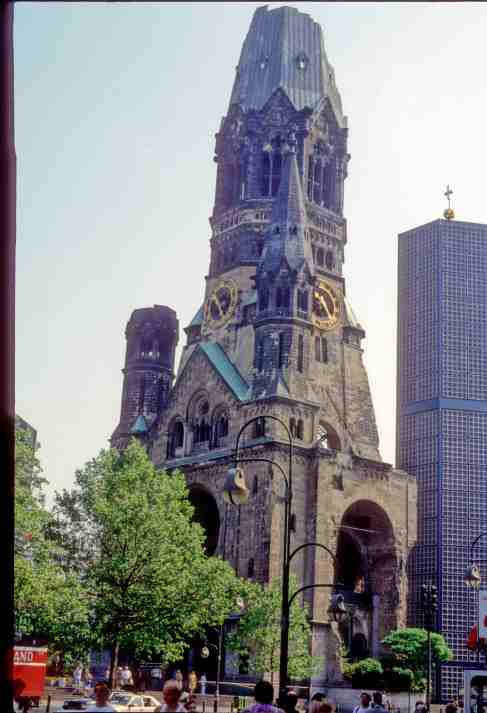 Along the Kudamm is the Kaiser Wilhelm Remembrance Church – left as it was after to war – to remind people. 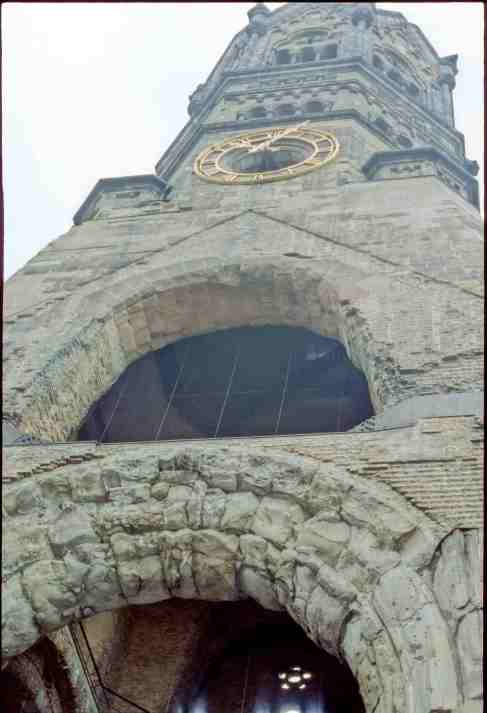 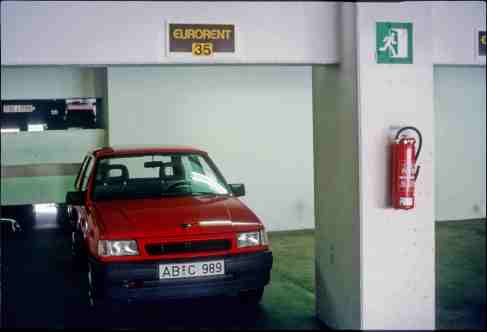 It could go 100 mph – and the Autobahn is so smooth with gentle curves that you weren’t even aware that you were going that fast.

Leaving Berlin for Dresden – a Russian memorial. Everywhere you go in Russia you will see memorials to the “Patriotic War” – I don’t believe most in the West realize how much the Russians suffered in the War. If the Nazis had treated them like humans they would have been glad to be rid of Stalin but…they were Nazis.

…On the way to Dresden.

If you want to get a real flavor of what life was like in the “GDR” – “German Democratic Republic” – I recommend Anna Funder’s Book and this critically-acclaimed movie.