Aerial delivery tests, as part of further operational demonstrations were conducted at China Lake, CA  using dummies for static-line drop tests. Cargo drops with 5000lb to 20,000lb were also conducted from an altitude of about 4750ft. The heaviest drop was a 28,243lb load of CDS containers. The primary result of the drop tests found the troop door was too narrow.

The YC-15 also tested mid air refueling as both a tanker and receiver in May-June 1976. 102 hookups were made with a KC-135. Fuel transfer to the receiver was found to be slow (partly because the UARRSI was not designed for the aircraft). Trails of the YC-15 potential tanker aircraft used Navy and Marine Corps aircraft fly a position slightly below and behind the aircraft to simulate the probe-and-drogue method of aerial refueling. 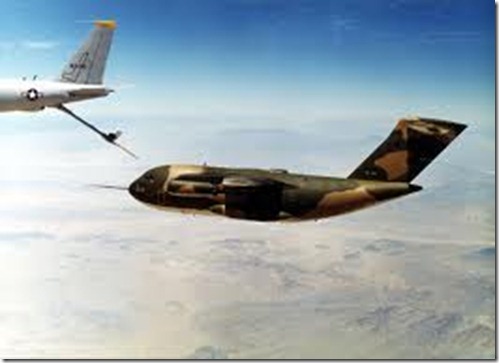 A McDonnell Douglas advertisement for the YC-15 showing an M-109 at the rear cargo door.

Overall the YC-15 was found to be a good airplane but had marginal maintainability. 2 of the biggest issues were was engine maintenance and the flight control system.  Naturally the YC-15 was going to have maintenance issues because it, like all research aircraft, was intended to test technology and not necessarily representative of an optimized “production-type” aircraft (I remind the reader to a look at the differences between the YF-22 and F-22).  Phase 1 tests ended in 18 August 1976. By then both aircraft accumulated 226 flights over 472.8 hours. The YC-15 demonstrated an ability to fly as slow as 62kt to a fast as Mach .78. The initial phases of flight test validates EBF as a valid solution to the STOL problem.

Phase II of the AMST program for the YC-15 began on 7 September 1976. Both aircraft underwent a number of modifications including having a CFM-56 turbofan engine installed on the #4 engine pylon. The wingspan was extended by 22.3ft as a result the wing area went from 367ft2 to 2107ft2! A fighter-type stick was also installed. 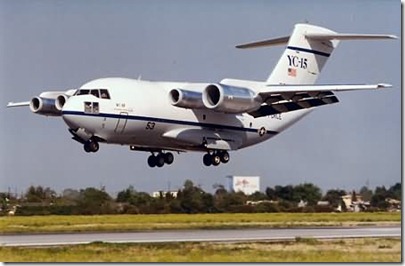 Previously shown picture of the YC-15 showing the installed CFM-56 engine on the #4 engine pylon.

On the software side, aircraft 876 had a number of modifications installed including a thrust management system (required because of the increased thrust of the CFM-56) (TMS), an Engine Failure Detection System (EFDS), a digital SCAS and the VAM was improved with a flight director indicator.

In Phase III testing aircraft 875 was returned to original configuration but had a Gross Weight Selector (GWS). The GWS would calculate the optimum flap angle for a given gross weight at various flight conditions. The DLC was improved to operated with and engine out on final approach. All these modifications (including the increased aspect ratio of the wing) resulted in a 10kt reduction in approach speed. The final tally for Phase III testing included 416 flights over 796.3 hours total for both aircraft.

By February 1978 both YC-15s were placed into storage at Edwards AFB.

Part IV will detail the technological contributions the YC-15 made to the C-17 program and the return to flight of the YC-15 in support of that program.

Cross-posted at Bring The Heat, Bring The Stupid.