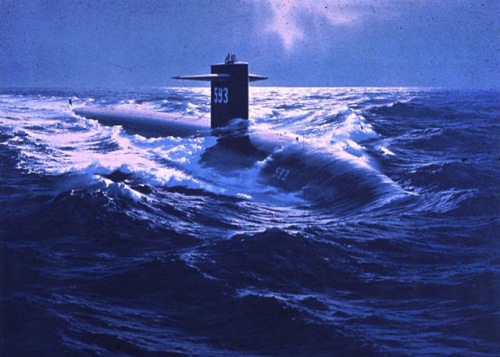 At 0800 hours on the 9th of April, 1963, USS Thresher (SSN-593) got underway from Portsmouth Naval Shipyard to begin initial post-overhaul dive trials in the Atlantic some 220 nautical miles east of Cape Cod.

129 men went down with Thresher in approximately 8,400 feet of water. 16 officers, 96 enlisted men and 17 civilian technicians. (A full list of those lost is
here.)

The company I work for was represented on board Thresher. With children in the Navy, friends who served in the Silent Service and working with people who support the Navy, this anniversary has a special poignancy for me.

I remember this event very well. I wasn’t quite ten years old when it happened. But growing up in New England as a young boy, not long after World War II and the Korean War, patriotism was much more wide-spread than it seems to be now. This was a major news item as I remember it. We were all saddened and shocked at the loss of Thresher. 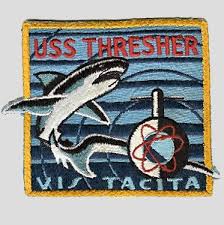 Requiescant in Pace
Until the Sea Shall Give Up Her Dead…