Jousting in the Dark with Flashlights

As I’ve related before in these pages, I am a casual flight-simulation enthusiast.  In my youth I was a much more devoted aficionado (if not a particularly skilled one), and I spent many happy hours flying (mostly one-way) virtual sorties into scarily dense integrated air defense networks.  But these days, I lack the time and proficiency to survive in that kind of unwelcoming environment, and so I satisfy myself with the prosaic tasks of practicing touch-and-goes, failing at in-flight refueling, and occasionally sparring with computer-controlled enemies at a skill level just low enough to make me the conquering hero.  Another oak leaf cluster for my Distinguished Flying Cross?  Why thank you, don’t mind if I do, you can paint the MiG silhouette right over there, that’s right Iceman, I am dangerous.  (Hey, don’t judge me.) 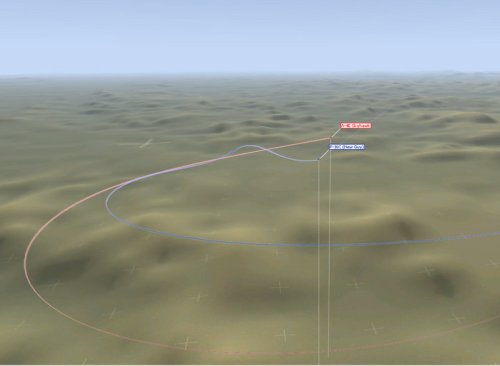 There I was in the blue F-16, trying to jump a partially-anesthetized, unarmed A-4E in a level turn...and, er, I wind up botching the end game with way too much closure. What looks like a tidy little displacement roll on the tape was really a frenzied attempt to avoid a mid-air collision.

However, it’s interesting after all these years to see how current technology is employed by serious simulator fans who have stuck with the hobby.  There are several different layers of simulation complexity.  The first is mastering the control and management of your own aircraft, which is a nontrivial exercise in the era of 700+ page “game manuals.”  (I am stuck at this level.)  The second is basic combat against a computer-controlled aircraft, the so-called “1-v-1” engagement.  This raises the complexity substantially, as weapons systems and tactics and all of the nastiness of an opponent come into play.  The third level is multiplying the number of aircraft in play, which adds the element of multi-tasking under stress.  And the fourth adds human players into the mix, which increases the chaos by an order of magnitude.

The “fourth-level” organized scenarios that are flown by serious devotees of the hobby are fascinating.  While there is plenty to read in the open literature about Basic Fighter Maneuvers, there is not a lot about how a large air battle involving fourth-generation fighters equipped with missiles of the AMRAAM generation would play out tactically (the seminal open-source work on the subject, Robert Shaw’s Fighter Combat: Tactics and Maneuvering, was published in 1985).  These are the intriguing parts of the mission that Lex could not show us on his helmet-cam — and for good reason, for there lie secrets upon which lives may one day depend.

But within the boundaries of what is publicly known, the experiences of the hardcore simulator crowd provide some fuel for thought.  Not so much as a predictive device — but rather, to get the “feel” of the thing, and in particular how tomorrow’s fighter pilot (or UCAV operator) will need to quickly synthesize all kinds of fragmentary information in a very short time to detect, identify, engage, kill, and withdraw.  If these games are any indication, it will be confusing, fast, violent, and curiously cerebral.

The Youtube video above is a recording of an air-to-air encounter during a Falcon 4.0 airfield strike, flown by a four-ship of F-16s over a simulated Korean peninsula.  (Or, more properly, flown by four civilian hobbyists over the Internet, at least one of whom has melodramatic tastes in background music.)  In this setup, they have no airborne radar controller with a God’s-eye view of the battlespace warning them of incoming threats.  Instead, they have to rely on their own radar warning equipment, their awareness of each other’s position, and the onboard data networking equipment that allows them to construct a common picture of what’s going on.  But they have to work to build that situational awareness, based on little half-second blips and buzzes that pulse on their threat receivers, and there is no time to spare, since modern missiles have the speed and range to kill virtually anything that can be detected, very quickly.  Compared to the WWII experience, it seems strangely abstract.

This second video is taken from a mission analysis tape (mimicking the military’s TACTS/ACMI systems, most current flight simulators have some kind of “flight recorder” capability that allows the mission to be carefully dissected afterward — this is an attractive little presentation package called TacView).  Here we see some of the consequences of chaos, when an F-15 takes a missile shot — and while his intended target exits the missile envelope, a friendly F-15 wanders into it.  With modern fighter aircraft being as agile as they are, and modern missiles having the range, kinematics, and “semi-smart” acquisition mechanics that they do, and everything happening fast fast fast…stuff can happen.

I don’t assert that these commercial entertainment products will predict the outcome of future air battles.  (Even assuming that flight simulations get the performance details within the ballpark, I think they still have a platform bias that undermodels operational-strategic capabilities which can change the battlefield fundamentals.)  But I do think that they do a more creditable job at capturing the flavor of that battlefield than a lot of other media, which rely too heavily on accounts of past air wars that are receding in relevance.

And if nothing else, these mission accounts are very entertaining for an old computer game player to watch.  They can be my wingmen anytime, no I can be theirs.  Er.  Well, something like that, anyway.

3 responses to “Jousting in the Dark with Flashlights”